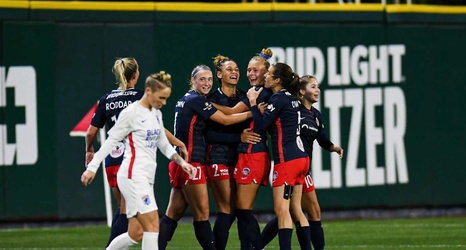 The Washington Spirit continued their impressive late-season form tonight with a 2-0 win over OL Reign. Setting aside Covid-19 protocol-related forfeits, both sides came into the match unbeaten in their last seven, but the Spirit notched their third win in an outstanding week with goals in either half from Taylor Aylmer and Ashley Hatch, who took over the NWSL Golden Boot lead with her 10th of the season.

Facing their fourth game in the last ten days, the Spirit could have been excused if they fielded a heavily rotated team. Instead, acting head coach Kris Ward made just two changes to the side that beat North Carolina 2-1 mid-week: Julia Roddar, fresh off of her first NWSL goal, replaced Paige Nielsen at the back, while Aylmer came in for Tori Huster in central midfield in what was the Rutgers product’s first league start.