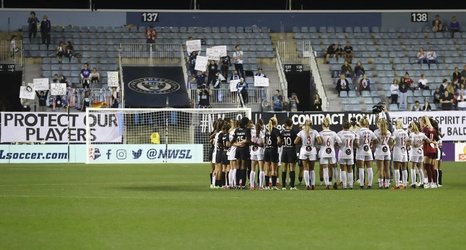 The Washington Spirit and NJ/NY Gotham FC battled to a 0-0 draw in a game with massive NWSL playoff implications...and that was not the story on Wednesday night at Subaru Park. Respectfully, the story was not the celebration of Carli Lloyd’s retirement either, even after Gotham went through the difficulty of moving the game to the Philly suburbs in her honor (though players from both teams still made sure to pay their respects after the match).

The story of the game was obviously NWSL players coming together in solidarity after horrific revelations of abuse came out late last week, with games rescheduled from this past weekend and all of Wednesday’s games paused in the 6th minute for players to stand as one at midfield.