D.C. United take a bite out of the Big Apple, winning 2-1 over NYCFC 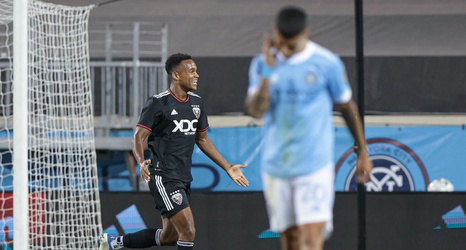 D.C. United squared off for a midweek matchup with the reigning MLS Champions, NYCFC, and won 2-1, breaking a long winless streak. In MLS style, the match was set at — of all places — Red Bull Arena.

The Black-and-Red were able to hold off their hosts for much of the first half, striking first in the 24’. Chris Durkin, once again, came in clutch for the Black-and-Red, finding Ola Kamara in a dangerous position, floating unmarked in the final third. Kamara easily tapped the ball in behind goalkeeper Sean Johnson’s back. Johnson had been drawn away by action to the right, leaving the threat Kamara posed unaccounted for.