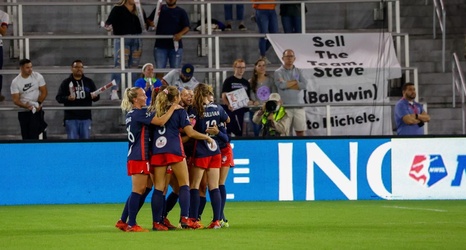 The Washington Spirit made no mistake at Audi Field, strolling past Racing Louisville to the tune of a 3-0 scoreline. Ashley Hatch scored early and late, both on assists from Trinity Rodman, while Andi Sullivan converted a penalty kick early in the second half as the Spirit moved back into a playoff spot in the NWSL standings.

Washington started confidently, essentially setting up shop in the Louisville half, and that positive opening lead to an early lead. Trinity Rodman won the ball along the right before delivering a lovely pass that was just barely out of the reach of Louisville’s Sinclaire Miramontez, but perfect for Ashley Hatch, who took a touch before tidily finishing past Michelle Betos in the 8th minute.