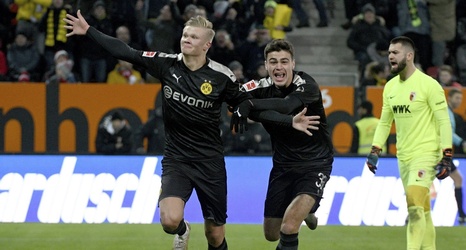 Several players competing in lesser leagues or with reserve/youth squads are not listed. Americans with dual nationalities representing other national teams have also been omitted.

Chelsea midfielder Christian Pulisic: not in the 18 (adductor injury, sidelined until mid-February) for 1-0 defeat at Newcastle United

Wolverhampton midfielder Owen Otasowie (age 18): not in the 18 for 3-2 victory at Southampton; U-23s, no match scheduled

Tottenham Hotspur defender Cameron Carter-Vickers: not in the 18 for 0-0 draw at Watford

Reading defender Matt Miazga, on loan from Chelsea: in the 18, did not play in 2-0 defeat at Millwall

Rangers defender Matt Polster: in the 18, did not play in 2-0 cup victory over Stranraer

Schalke midfielder-defender Weston McKennie: not in the 18 (shoulder injury) for 2-0 victory over Mönchengladbach

Lille forward Tim Weah (age 19): not in the 18 (hamstring injury, returned to training) for 2-0 cup victory at Gonfrieville