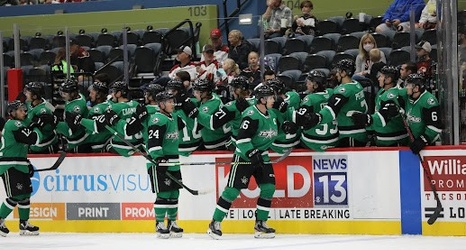 Tucson, AZ - The Texas Stars returned to the win column by virtue of a hard fought 6-2 victory over the Tucson Roadrunners (Phoenix Coyotes affiliate) in a game that was much closer than the score would indicate. Tucson outshot the Stars 38-26 on a night that included a 17-6 third period shot advantage for the Roadrunners

The Stars were led by 2 goals from Joel L'Esperance and a 36-save effort from Jake Oettinger drew their record even on the season at 2-2-0 while also earning a split on the abbreviated 2-game road trip.

Stars captain Curtis McKenzie got the scoring started on the power play 9:31 into the game on a sweet elevated shot on the stick side of Roadrunner goalie Ivan Prosvetov comoing off snap feeds from Jason Kamaguchi and Riley Damiani.