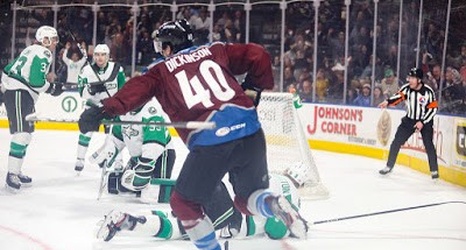 The second game in this mid-week set didn't go quite as well as the first for the Texas Stars as they fell to the Colorado Eagles on Wednesday night 3-1. Joel L'Esperance scored the lone goal for Texas in the second period, tying the game before Colorado took over.

Eagles forward Josh Dickinson, Dallas Star Jason Dickinson's younger brother, opened the scoring from an awkward angle with three minutes left in the opening period. Landon Bow got the start in net and was left flailing on the play as his teammates failed to clear the puck from the zone.