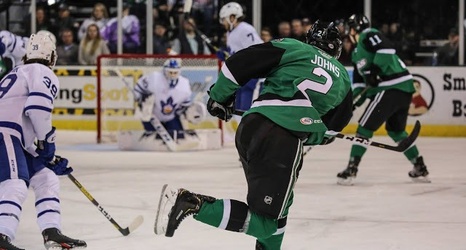 Stephen Johns's return to professional hockey was as advertised. Showing no signs of any rust despite 22 months without a competitive game, the defender on conditioning assignment from Dallas was an unbelievable in every aspect of the game, tallying a goal and three assists. He scored and cleared out Marlies in the defensive zone with equal aplomb and helped Texas to a 5-3 comeback win.

"Every time he was on the ice, he made a difference," said coach Neil Graham postgame. Landon Bow added, "From the moment, he stepped on the ice he didn't belong here."

Johns played on the power play, penalty kill and logged more than twenty minutes on the evening paired mostly with captain Dillon Heatherington.