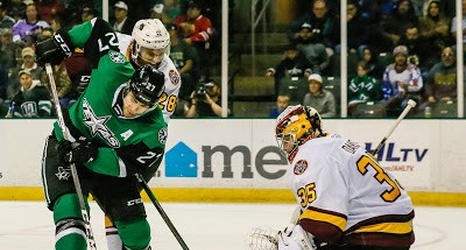 Goals were hard to come by for a Texas Stars team that lost 2-1 to the visiting Chicago Wolves on Friday night. The Stars scored first and mostly dictated play in the first half of the contest but were done in by two unanswered Wolves goals.

“We really didn't sustain the same pressure that we had in the second period,” said head coach Neil Graham. “And, you know, we had a few few looks, but it wasn't enough to get tied up.”

Those looks mostly came in the form of several back door plays that just didn’t connect on a night when the Stars were searching for offense.