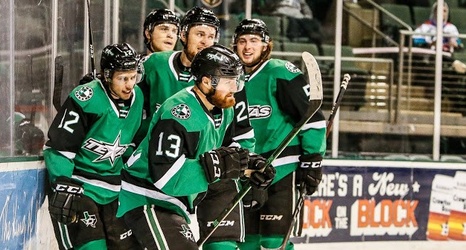 The AHL announced this afternoon that Riley Damiani and Adam Mascherin have both been named to the Central Division All-Star team. Damiani was honored as an All-Rookie selection yesterday. The pairing of the two was the story of Texas's season as they combined for 70 points in this pandemic-shortened season.

For Damiani, it's another feather in his cap in a strong season overall. Usually, fifth round picks don't garner this much post-season hardware, but Dallas has had a knack for hitting on fifth rounders (John Klingberg, Jamie Benn) for whatever reason.

For Mascherin, it's a huge honor.