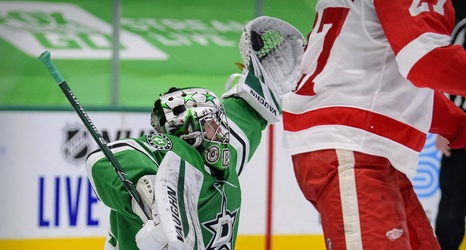 Sometimes it’s difficult to remember that the Dallas Stars had two goalies who underwent offseason surgery. Ben Bishop’s knee procedure made headlines, and his complete recovery could extend into early April. But in the meantime, neither Anton Khudobin’s hand operation, nor his late-autumn bout with COVID-19, have stopped the Kazakh Scorpion from putting up some of the NHL’s best stats.

Three games into the 2021 season, Khudobin leads the league with a 0.99 goals-against average and is second in save percentage at .958. Stars senior staff writer Mike Heika writes about how he’s segued seamlessly from the Stanley Cup playoffs into his current hot start:

Khudobin has been a backup for most of his career, so carrying the load is a bit new.