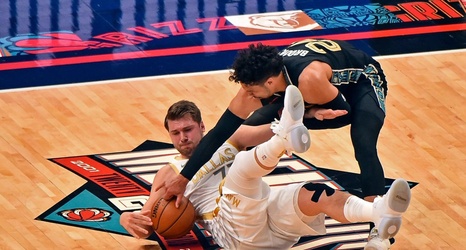 Facing what would have been a gut-punch loss with major playoff implications, Luka Donu010diu0107 tossed in a stumbling, buzzer-beating 3-pointer to give the Mavericks a 114-113 victory over Memphis Wednesday night at FedEx Forum.

It was an unlikely win after the Mavericks had trailed most of the way, including 111-106 with just over a minute to play.

Donu010diu0107 finished with 29 points, 25 of them in the second half, to go with nine assists as he, Jalen Brunson and Kristaps Porzingis willed the Mavericks to a victory that stopped a slide of three losses in four games and kept them safely ahead of the Grizzlies and in the seventh playoff seed, with now a legitimate shot to move up to sixth.