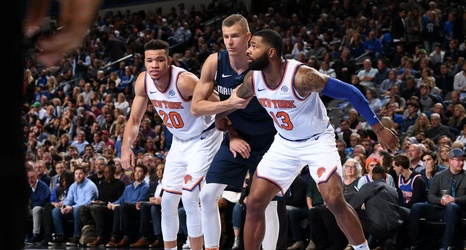 Kristaps Porzingis and the Dallas Mavericks welcomed the New York Knicks to the American Airlines Center Friday night, in a clash of two teams meeting for the first time since their blockbuster trade last winter.

It was a reunion for more than just Porzingis, as Tim Hardaway Jr. and Courtney Lee were also part of that January deal. Dennis Smith Jr. was sent to New York in the trade, but did not appear in tonight’s matchup.

Rick Carlisle trot out yet another starting lineup combination, adding Lee, Dorian Finney-Smith and Dwight Powell to the superstar duo of Luka Doncic and Porzingis.