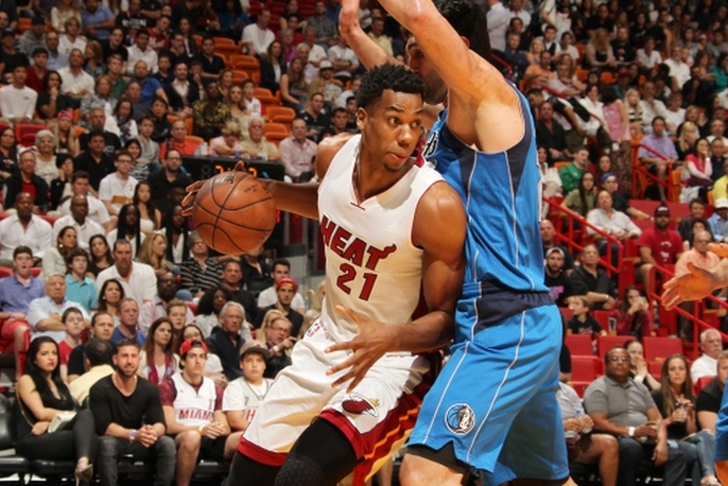 The Dallas Mavericks head into the offseason hoping to add the pieces necessary to turn themselves from a playoff team into a title contender, and are going after some of the top free agents on the open market. Here are all the latest Mavs news and rumors you need to know:

Hassan Whiteside favoring Mavs over Heat?
Whiteside is considered to be the best big man on the open market this summer, and several teams are pursuing him. However, he is favoring a return to the Miami Heat, according to Steve Kyler of Basketball Insiders.

Want to be clear on Hassan Whiteside, he'd like to stay in Miami - they can offer biggest deal, but he's not romantic about it. Its business

Whiteside is expected to receive a max contract this offseason, yet the Heat appear to be reluctant to give him that much money - especially given their limited cap space and pursuit of Kevin Durant.

That pleases the Dallas Mavericks, who are known to be "aggressively pursuing" Whiteside and "feel pretty good" about their chances to land him, according to the Fort Worth Star-Telegram.

After hearing what Hassan Whiteside said when he met the Miami media over the weekend, the Dallas Mavericks probably feel pretty good about their chances of signing the Heat’s free agent center.

Dallas has a few factors going for them which has made them the frontrunners to land Whiteside. First off, they plan to offer him a max contract as soon as possible, pleasing Whiteside's "businessman" side. They're also hoping to sign Mike Conley to a max contract, creating a Big 3 with Conley, Whiteside and Dirk Nowitzki.

Third, and perhaps most importantly, the Mavericks plan to make Whiteside the focal point of their offense, something he openly desires. The Fort Worth Star-Telegram says the Mavs "will tailor their offense around him and make sure he gets between 15-20 field goal attempts per game."

Whiteside plans to make his decision on July 1, and the Lakers and Trail Blazers are also pursuing him. He averaged 14.2 points, 11.8 rebounds and 3.7 blocks per game last season.

Parsons leaving for Grizzlies?
While the Mavs pursue Whiteside and Conley, they will let Chandler Parsons pursue other opportunities as a free agent as they will not give him the max contract he is seeking. According to Geoff Calkins of the Memphis Commercial Appeal, the Grizzlies are a team that could offer Parsons that max he is looking for.

Who else might they target? Everyone has suggested Nic Batum. I wouldn’t be surprised if they try and throw a max deal at Chandler Parsons.

Knee injuries have plagued Parsons each of the past two years, cutting short both of his seasons with the Mavs. He averaged 13.7 points and 4.8 rebounds per game last season.

Mavs interested in Jamal Crawford
Crawford has been a crucial player for the Clippers over the past four seasons, but several teams are interested in signing the 36 year old this summer, reports the Orange County Register:

Crawford, who does have a meeting scheduled with the Clippers, is also drawing interest from a number of teams in search of a scoring guard. Crawford is expected to receive interest from the New York Knicks, the Miami Heat, the Toronto Raptors, the Dallas Mavericks, the Orlando Magic and the Brooklyn Nets in addition to the Clippers.

“I definitely have to keep an open mind and see what’s out there,” Crawford said. “That’s why you’re in this position. My preference, like I’ve said from the get go, is to go back to the Clippers. But, I’m definitely very, very open-minded about the whole free-agency process.