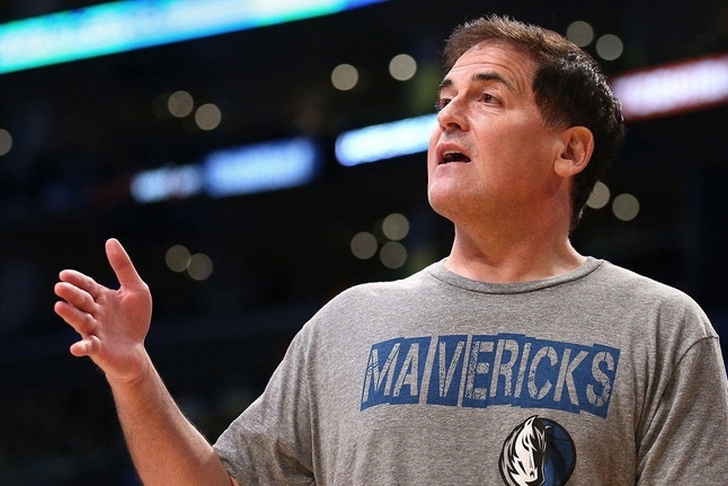 According to Sports Illustrated, more than a dozen former and current employees characterized the Dallas Mavericks work environment as unsafe for female employees. At the front of the problems within the Mavs organization is now-former team president and CEO Terdema Ussery. He's accused of repeated predatory sexual behavior and wildly inappropriate comments toward multiple women. Some of the reported incidents are detailed below.

"You’re going to get gang-banged," Ussery said. "Aren’t you?"
"No." the woman replied, shocked. “Actually, I’m going to the movies with friends.”
“No." Ussery insisted. "You’re definitely getting gang-banged."

That example from Ussery was far from the only incident. In fact, when the women mentioned above took the position, she was warned about the team president. Another woman claimed Ussery asked her sex multiple times. Per Sports Illustrated, the front office was a culture that allowed Ussery and others to continue their behavior. That came in spite of multiple reports to HR.

"It was a real-life Animal House," said one former employee who left recently after spending about five years with the Mavericks. "And I only say ‘was because I’m not there anymore. I’m sure it’s still going on.”

Ussery left the team in 2015, but he wasn't the only Mavs employee who didn't behave properly. There was allegedly public fondling by the team president. There was domestic assault by Mavs.com writer Earl Sneed, who was arrested at the team facility and had another incident with a co-worker he was dating. Sneed was only fired after Sports Illustrated was about to release their story. One employee even openly watched pornography at his desk.

Here were some of the other accusations against Ussery, as reported by SI.

Incident: Terdema stops me near where the main door … is and says to me “seriously … just one time.”
Incident: Terdema asks me if in another life would I marry him? I respond if it was another life I would be a millionaire and own this team and he couldn’t handle working for me.
Incident: Terdema sits next to me in the two chairs in front of his desk and as he is talking to me, he puts his hand on my left thigh, about halfway up the thigh.

Paul Monroe, Mavs' VP of marketing, is accused of threatening to fire a woman who reported Ussery's actions if she "didn't shut up and do her job" and "just take" the abuse because Ussery was the boss. Monroe denied those allegations.

The Mavericks conducted an internal investigation of Ussery after several female employees made complaints of inappropriate workplace behavior in the summer of 1998. Ussery was retained, but shortly thereafter the entire Mavericks workforce received new employee handbooks, which included a new sexual harassment policy. The investigation didn't slow down Ussery's career because in February of 1999 he received a three-year contract extension and when Mark Cuban purchased the team in 2000, Ussery remained the team, President.

Ussery responded to the recent allegations in a statement to Sports Illustrated.

“I am deeply disappointed that anonymous sources have made such outright false and inflammatory accusations against me,” Ussery said. “During my career with the Mavericks, I have strived to conduct myself with character, integrity, and empathy for others."

"During my nearly 20-year tenure with the Mavericks, I am not aware of any sexual harassment complaints about me or any findings by the organization that I engaged in inappropriate conduct. In fact, on multiple occasions I and other senior executives at the organization raised concerns—both in person and in emails—about other Mavericks employees who had engaged in highly inappropriate—and in some cases, threatening—sexual conduct. The organization refused to address these concerns, and I believe these misleading claims about me are part of an attempt to shift blame for the failure to remove employees who created an uncomfortable and hostile work environment within the Mavericks organization.”

While the front office was an issue, the actual locker room was not.

"I dealt with players all the time," one female staffer told SI. "I had hundreds of interactions with players and never once had an issue…they always knew how to treat people. Then I'd go to the office and it was this zoo, this complete shitshow. My anxiety would go down dealing with players; it would go up when I got to my desk."

Mark Cuban, the Mavs' owner, claims he was not aware of the workplace environment within the Mavs' organization. While Cuban was not accused by any of the women, he was accused of knowing.

"Trust me, Mark knows everything that goes on," one longtime former Mavericks employee told SI. "Of course Mark knew [about the instances of harassment and assault]. Everyone knew."

Cuban has denied those allegations and has begun firing people.

"This is all new to me,” Cuban said to SI. “The only awareness I have is because I heard you guys were looking into some things ... Based off of what I’ve read here, we just fired our HR person. I don’t have any tolerance for what I’ve read ... It’s wrong. It’s abhorrent. It’s not a situation we condone. I can’t tell you how many times, particularly since all this [#MeToo] stuff has been coming out recently I asked our HR director, ‘Do we have a problem? Do we have any issues I have to be aware of?’ And the answer was no.

Cuban said the Mavs would solve their problems.

"I want to deal with this issue," Cuban told SI. “I mean, this is, obviously there’s a problem in the Mavericks organization and we’ve got to fix it. That’s it. And we’re going to take every step. It’s not something we tolerate. I don’t want it. It’s not something that’s acceptable. I’m embarrassed, to be honest with you, that it happened under my ownership, and it needs to be fixed. Period. End of story."