Will Ezekiel Elliott Have A Better Career Than Emmitt Smith? 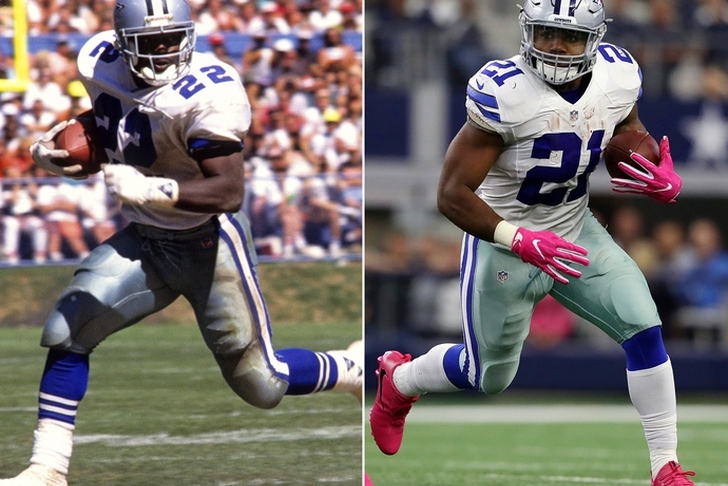 Elliott has played 23 games in his career thus far and has been very productive and even broke the Cowboys rookie rushing record last season with 1,631 rushing yards. In his first 23 games, he has 22 touchdowns, 2,414 rushing yards, and 51 receptions for 573 yards and three touchdowns.

Smith in his first two seasons (32 games) he had 2,500 rushing yards, 23 touchdowns, and 73 receptions for 486 yards and one touchdown. So one can definitely argue that Elliott has been better through the first two years of their career. But this isn't a question about the first two seasons, it's career long.

Emmitt Smith played 15 seasons in the NFL where he missed only 14 games which for a running back is simply amazing. He carried the ball 4,409 times for 18,355 yards and 164 touchdowns. He ranks first in rushing attempts, rushing yards, and touchdowns among all running backs in NFL history and it isn't even really close. So basically the intro paragraph should say is Elliott going to have the greatest career of all time among running backs.

Just to list some of the accomplishments that Smith has are three-time Super Bowl champion, a Super Bowl MVP, eight-time Pro Bowler, an MVP, and many more.

We as people are programmed to forget the past and over hype the present, it's recency bias and it's plaguing our country. Sorry, Elliott isn't the GOAT, in fact, he won't even be the best running back in franchise history.

Will Ezekiel Elliott have a better career than Emmitt Smith? #DallasCowboys