Why Is The NFL Still Investigating Cowboys RB Ezekiel Elliott? Here Are Some Possible Reasons 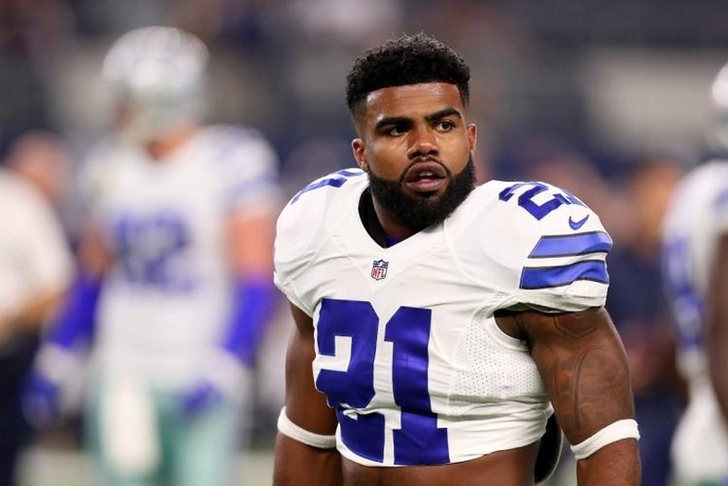 It's been nearly a year since Dallas Cowboys RB Ezekiel Elliott was accused of domestic violence. The NFL still has not closed it's investigation into Elliott and there's still no timetable for when the NFL will announce what, if any, discipline there is for Elliott. So what is taking so long? Surely by now, the NFL has enough information gathered to make a decision.

Before we get to the reasons, there's some more background info we need to get to. The investigation stems from a late July 2016 incident in which Elliott was accused of beating a woman who he had a “sexual relationship” with. In September, Columbus, Ohio police announced they would not file charges. Elliott also had evidence that the woman made up the charges and asked a friend to lie about what happened. The NFL’s lengthy investigation comes after the league was widely ridiculed for its handling of the Ray Rice and Josh Brown domestic violence cases.

In March, there was a report that Elliott had been told he was in the clear of the NFL case, but that's not the case it seems. So why the delay? Here are some theories and reasons why the NFL is still investigating Elliott, ranging from conspiracy theory witch hunt to the more mundane reasons.

It's A Witch Hunt
Let's start with the fun one, okay? I'll let the Twitter users explain this one.

The @NFL is on a mean ass witch hunt with this @EzekielElliott stuff. It's a darn shame. Y'all should be ashamed of yourselves.

The NFL won't rest until the very innocent Ezekiel Elliott is suspended. It's the biggest witch hunt in NFL history!

This is just an evil witch hunt now...Goodell wants Zeke suspended badly and its over evident...hes a pure joke

Those are just some of the examples and there are far more on Twitter. The reasoning is simple: the NFL is out to get the Cowboys / Zeke / Jerry Jones. One major issue: Does the NFL really want to take down one of its budding young stars and piss off perhaps its most powerful owner and soon-to-be Hall of Famer? It's a reach, although the longer the investigation drags on the louder the "witch hunt" cries will become.

The League Believes Elliott Is Guilty
While the police, Elliott, his family and witnesses believe Elliott is not guilty, there's no guarantee the league feels the same way.

"The reason(s) for the delay aren’t clear. Perhaps (speculation alert) some involved in the process believe the alleged victim and others believe Elliott," Mike Florio of Pro Football Talk writes. "Perhaps (speculation alert) the league is trying figure out how to properly balance a desire to eradicate domestic violence from the sport with the need to placate one of the most powerful owners in all of sport."

Based only on the evidence gathered so far, it appears that Elliott did nothing wrong. After all, there are the alleged texts showing the accuser asked a friend to lie. Still, it'd be a disservice to dismiss the idea that Elliott is guilty or at least that some within the NFL believe the accuser.

The League Is Mediating A Settlement
This is one of the more fascinating theories on here, as presented by Florio.

"In the absence of clarity or transparency, it’s hard to know why this is taking so long. It could be that investigators are diligently working toward resolving what amounts to a dispute between Elliott and his accuser as to what he did and didn’t do. It could be that whoever will be making the decision within the walls of 345 Park Avenue is having a hard time navigating strong pressure from one of the most powerful owners in the sport and delicate P.R. considerations that compel vigilance and stringency, especially if Elliott’s accuser decides that her failed effort to get satisfaction either in the criminal justice system or in the Court of Roger Goodell will culminate in a public effort to tell her story — a story that could be deemed credible, making the league’s decision to not take action against Elliott seem incredible.

"At the heart of the situation could be (emphasis: could be) a behind-the-scenes effort by the league to broker a settlement of all potential civil claims that the accuser could make in court, which would provide a real and legitimate platform for her story to be told. This would allow the league to close the book on Elliott without fear of a subsequent effort by the accuser to make the league look bad for giving him a pass."

While there's no evidence to suggest this is the case (and Florio stresses it's all speculation), it does make some sense. Doing this would help ensure the NFL avoids the blowback it's faced in other cases. It's a long-shot theory, but a plausible one.

Lack of Trust
For all his on-the-field talent, Elliott's decision-making isn't the greatest off-the-field. So perhaps the NFL is using it's investigation to try to make sure Zeke stays out of the headlines for the wrong reasons.

"If there’s one thing the NFL cares deeply about, it’s its image – especially in light of the controversies that have surrounded it in recent years," David Helman of DallasCowboys.com writes. "Ezekiel Elliott is now one of the NFL’s most visible players, and he stands to embarrass the league if he gets himself into trouble. I firmly believe that’s why you’re seeing this drawn out investigation. I doubt the NFL trusts Zeke to stay out of the headlines, so they’re keeping the book open on him just in case. Is it fair? No. But a lot of stuff the NFL does isn't exactly fair."

Elliott hasn’t done the greatest job of keeping himself out of trouble. He visited a legal marijuana dispensary before a preseason game and was caught pulling down a woman’s top at a St. Patrick's Day Parade (consensually, apparently). While neither event resulted in any type of discipline, it’s not the best look. Helman's theory is a believable one.

The Shadow of Ray Rice
Fair or not, the actions of Ray Rice and the way the NFL handled his punishment remains a factor in how the NFL handles other domestic violence cases. And ESPN's Adam Schefter believes the shadow of Rice remains an issue.

"There's no doubt in my mind that that has to be a part of the league's thinking," Schefter said. "Because there are some questions that the league has about this particular case and this particular player and this particular player's behavior. And so I think the league is being incredibly thorough and incredibly detailed because to your point, for instance, the league said today or yesterday, 'We have not found sufficient evidence to suspend Ezekiel Elliott. He will not be disciplined under the personal conduct policy.' And then a month later, two months later a video surfaced on ESPN or TMZ or wherever it may be, there would be people who lose jobs. So the league has to be incredibly careful and incredibly thorough. And I think that's part of the reason that it's gone on for over a year. You're talking about one of the most high-profile players in the league for the most high-profile franchise in the league in a situation that on its surface seems rather disturbing despite the fact that other people have said he didn't do anything wrong."

There was also the disastrous Josh Brown situation, in which the NFL botched the investigation. Brown abused his wife over a period of multiple years, with the NFL giving him only a one-game suspension. All that was revealed in the midst of the Elliott investigation. It might be not Elliott's fault in this case, but it's reasonable to think the NFL really, really doesn't want another PR disaster if they close the investigation too quickly.

Perhaps It's Multiple Reasons
Given what we know and what's been reported, it would be a massive surprise and the wrong decision if Elliott faces any actual discipline. It's been a year now, if the NFL is going to suspend Elliott, they should have already done it. I'm in the camp that the reason for the elongated investigation lies in the reasons proposed by Helman and Schefter.

Fear is a powerful motivator and I suspect it's behind the investigation of Elliott. The NFL fears another Josh Brown or Ray Rice situation, where they hand out little-to-no-penalty and then more information comes out and the NFL looks terrible. Perhaps they fear if they clear Elliott, he'll do something foolish again and make the league look bad.

But fear is not a reason to delay a decision. It's nearly been a complete calendar year. It's time for the NFL, in a classic late Friday news dump, to announce there's no punishment for Elliott.