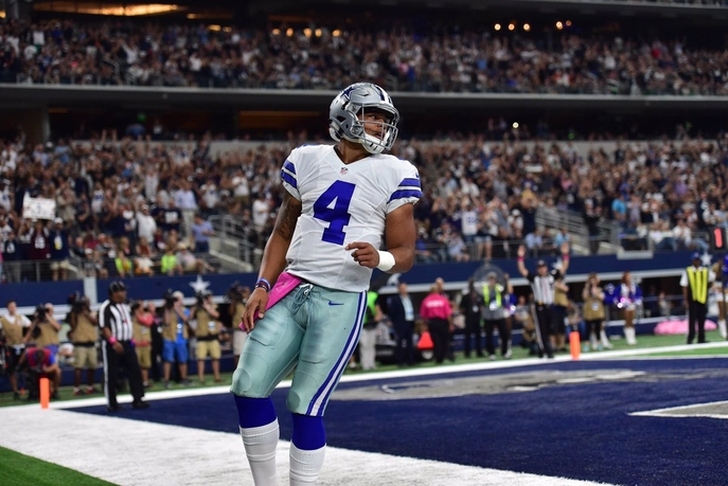 The Dallas Cowboys had little trouble with the Cincinnati Bengals Sunday. The final score read 28-14, but the Cowboys jumped out to a 28-0 lead and then put it on cruise control. The Cowboys are now 4-1 and atop the NFC East.

Here's what we learned from the Cowboys' 28-14 win over the Bengals Sunday.

3. The Pass Rush Has Life
The Bengals don't have a great offensive line, but you better believe the Cowboys are excited about recording four sacks this week. That nearly matched their season total for the first four games of the season. DeMarcus Lawrence looked impressive throughout this one, and although he didn't show up in the box score, he generated pressure all game. That helped Benson Mayowa record a sack and for Terrell McClain to continue his surprising play with 1.5 sacks. If the pass rush plays like this all season, the Cowboys could have a strong defense. We're talking Top 15 unit.

2. The Dak Prescott Hype Train Is Picking Up Speed
Tony Romo is still the starting QB for the Cowboys, or at least he will be when he gets healthy. But that doesn't mean the buzz around Prescott is getting quieter. Prescott was sharp again against the Bengals, completing 18 of 24 passes for 227 yards, 1 TD and no INTs. Prescott hasn't been a world-beater, but he's provided the steady hand the Cowboys lacked at QB last year when Romo went down. He certainly looks the future at QB. The budding controversy at QB between Romo and Prescott is a far cry from last year's disaster trio of Brandon Weeden, Matt Cassel and Kellen Moore.

1. The Cowboys Are Legit
It was easy to chalk up wins over the Redskins, Bears and 49ers as games against bad teams. That won't be as easy to do with this one. The Bengals should push for a playoff spot and they made the postseason last year. And the Cowboys dominated them like no team had this season. Not even the Steelers and Broncos beat Cincinnati in the same way Dallas did. The Cowboys ran the ball only 29 times, but had 180 yards and three scores. The Bengals hadn't allowed a rushing TD all season long. Dallas' defense was worrisome entering the season, but even a previously bad pass rush posted four sacks against the Bengals. A.J. Green had only 50 yards. If the Cowboys keep playing like this, look out NFL.