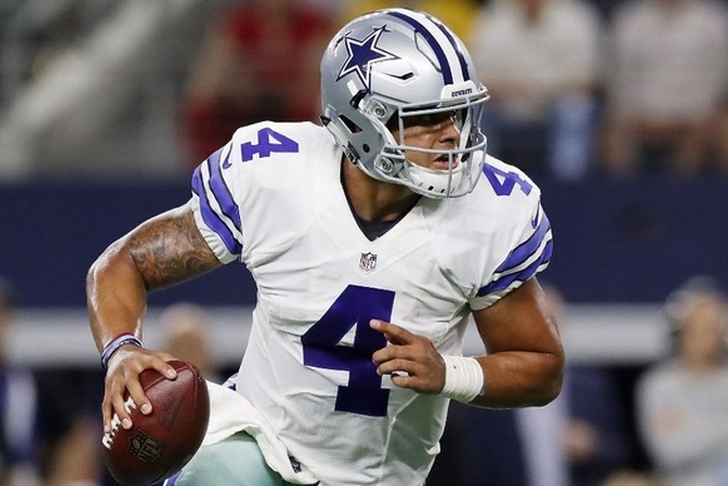 The Dallas Cowboys picked up yet another win, beating the Baltimore Ravens 27-17 Sunday. It's nine straight wins for the Cowboys, the first time they've ever done that in franchise history. Dallas is rolling with Dak Prescott at the helm and they look like the best team in the NFC, if not the NFL.

Here are 3 things we learned from the Cowboys' 27-17 win over the Ravens Sunday.

3. The Cowboys Are Better With Dez
'Member when certain media members (looking at you Donovan McNabb and Colin Cowherd) said the Cowboys would be better off trading Dez Bryant? I 'member and I also 'member thinking that was one of the dumbest things I've heard. Once again, that was proven correct against the Ravens. Bryant was fantastic, reeling in 6 of 8 targets for 80 yards and two scores. He's the true big-play threat on the Cowboys offense. With Ezekiel Elliott somewhat limited (25 carries for 97 yards and 4 catches for 40 yards), this was the type of game

2. Cowboys Made The Right Call With Prescott
Look, Tony Romo will always (or at least should) hold a special place in the hearts of Cowboys fans. And yeah, he could do just as well as Prescott is right now. But the results speak for themselves. Prescott again had some issues early and missed a few open passes. But every coach in the country will gladly take 27 of 36 passing for 301 yards and 3 TDs (plus 16 rushing yards). Romo might not be done with the Cowboys quite yet (a Prescott injury and he's right back there), but this is Prescott's team. And it's working, so why change it?

1. More Records Set
For the first time in franchise history, the Cowboys have a nine-game regular season winning streak. Not even the 1990s Cowboys dynasty was able to do that. Ezekiel Elliott set the Cowboys' rookie rushing record, and there' still multiple games left. He'll end up shattering that record. And finally Dak Prescott became the first rookie in NFL history with at least 300 passing yards, two TDs and zero picks in back-to-back games. So what's next for this team?