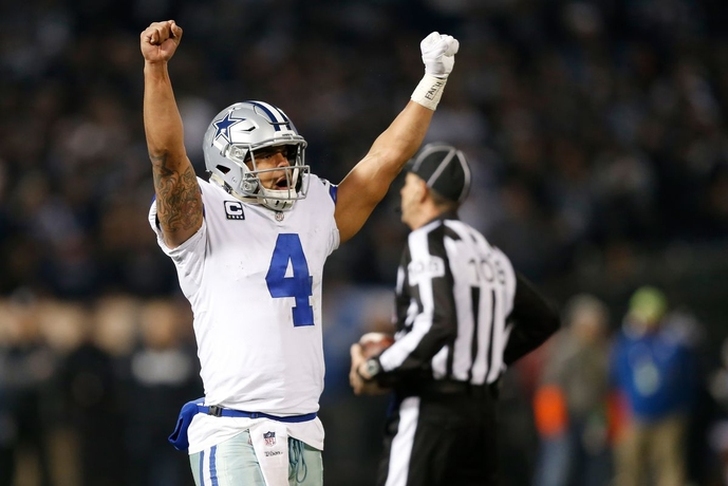 The Dallas Cowboys enter Week 16 coming off a huge win, beating the Oakland Raiders on Sunday Night Football 20-17.  The Cowboys defense had a solid game, disrupting quarterback Derek Carr all night. Their performance set the tone for the Cowboys offense, which is why they won the game.

The Cowboys found a way to win without Ezekiel Elliott the last three weeks and will get him back this week against the Seahawks. They will need to win both of their next two games to have a chance of making the playoffs. The next two games for the Cowboys are:

The 'Boys only have a chance of making into a Wild Card spot, which means they need a better record or own the tiebreaker against at least all but one of those teams. Below is the current playoff picture with postseason percentages, starting with the wild card teams and the ideal outcomes.

6.) Atlanta Falcons (9-5) - Wild Card, 76% chance to make the playoffs
REMAINING OPPONENTS: at Saints (10-4), vs. Panthers (10-4)
The Falcons need to have fewer wins than the Cowboys since they beat the Cowboys and own the tiebreaker, but it wouldn't be surprising to see the Falcons lose their last two games

7.) Detroit Lions (8-6) - 26% chance to make the playoffs
REMAINING OPPONENTS: at Bengals (5-9), vs. Packers (7-7)
The Lions are above the Cowboys in terms of playoff tiebreakers, so the Lions need to lose at least one game.

8.) Seattle Seahawks (8-6): 13% chance to make the playoffs
REMAINING OPPONENTS: at Cowboys (8-6), vs. Cardinals (6-8)
The Seahawks have lost two games in a row and have the same record as the Cowboys entering their Week 16 matchup. If the Cowboys beat the Seahawks this week, they would own the tiebreaker and move up the playoff rankings.

9.) Dallas Cowboys (8-6) - 5% chance to make the playoffs
REMAINING OPPONENTS: vs. Seahawks (8-6), at Eagles (12-2)
The chances aren't high for the Cowboys, but if they are able to win out, they give themselves a real shot. Even though the schedule is difficult, they get Ezekiel ElliottBACK this week. This matchup against the Seahawks is essentially a playoff elimination game with both teams sitting at 8-6. If all other scenarios above go perfectly, the Cowboys will make the playoffs.