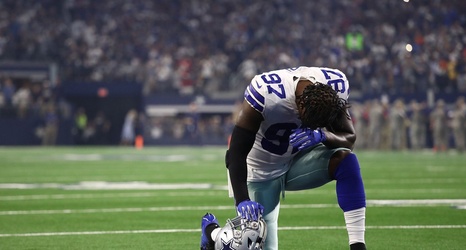 What do Ryan Leaf, Courtney Brown, Lawrence Phillips, JaMarcus Russell, Blaine Gabbert, Blake Bortles, Tony Mandarich, Vernon Gholston, and Aaron Curry all have in common? Well, it isn’t that they were drafted by or played for the Dallas Cowboys at any point in their respective careers, but it’s the fact that they are all among the biggest NFL Draft busts in history.

As mentioned, none of them were drafted by the Dallas Cowboys, but the 28th overall pick of the 2017 NFL Draft was. Taco Charlton was drafted out of Michigan by the Cowboys and was supposed to be a versatile and tenacious pass rusher.