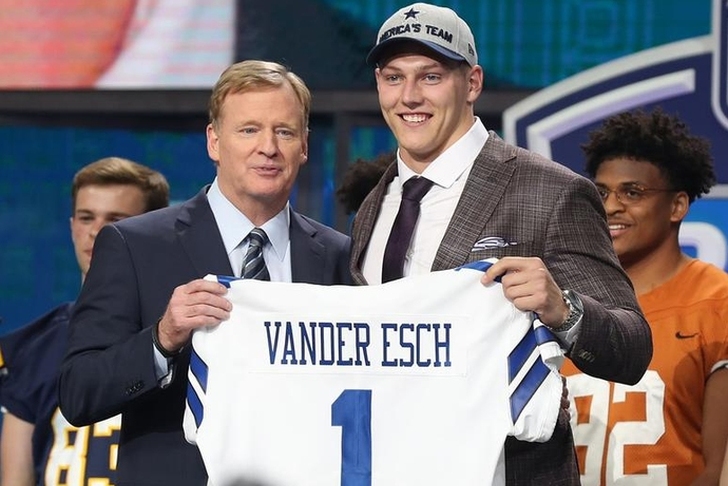 USA Today
Grade: B
Breakdown: "Leighton Vander Esch dismissed rumors about his neck, though medical concerns have sadly become commonplace in Dallas' linebacker room. Assuming he's OK, he was a good decision in Round 1 rather than reaching for a receiver. Jerry Jones and Co. got leapfrogged in the second round by Philadelphia, which took TE Dallas Goedert ... who might have been a fine replacement for Jason Witten. Still, the Cowboys got an excellent player 50th overall in Connor Williams, who will further strengthen what's arguably the league's top O-line. WR Michael Gallup (3rd round) and TE Dalton Schultz (4th) won't make anyone forget Dez Bryant or Witten, but that shouldn't be the expectation. Trading for versatile Tavon Austin was a low-risk investment at the cost of a sixth rounder. Fifth-round QB Mike White could give Cooper Rush a summer battle to be Dak Prescott's backup. "

ESPN
Grade: B-
Breakdown: "So I can see what Jerry Jones & Co. did on the first two days of the draft. I had Bama linebacker Rashaan Evans higher on my board, but I can't deny Leighton Vander Esch's high ceiling. The Cowboys see him as a Rolando McClain-type middle linebacker, who can be a playmaker against the pass and stick backs behind the line of scrimmage. Vander Esch surged up boards after the combine, but he had only one great year of tape at Boise State.

"I see Connor Williams as more likely to move inside to guard, so that means Collins could stick at tackle. And that's a good value at No. 50 -- Williams looked like a top-15 pick in 2016 but dipped a bit on play and measurables -- his arms are a little short. I said on Friday night that Dallas grabbing wide receiver Michael Gallup was one of my favorite picks of the third round. He's an underrated player but don't expect him to replace Bryant. Dorance Armstrong Jr. (116) had an injury-plagued 2017 season but had 10 sacks in 2016. You trust defensive coordinator Rod Marinelli to get the best out of him. Dalton Schultz(137) isn't going to replace Witten, but at least Schultz isn't allergic to blocking. I thought Mike White (171) could have gone late in the second round, so that's a good pick. If Bo Scarbrough can play special teams, that's a good pick late in the seventh round."

Bleacher Report
Grade: A-
Breakdown: "Few teams were able to add the balance of athletic upside and quality players that the Dallas Cowboys did. They got top prospects at linebacker in Leighton Vander Esch and guard Connor Williams, and both will step in as starters with considerably high ceilings to improve. They're joined by two players who had average measurables but excellent tape in receiver Michael Gallup and defensive end Dorance Armstrong.

"Vander Esch and Gallup are especially notable as early contributors. The linebacker trio of Sean Lee, Jaylon Smith and Vander Esch is among the most physical and athletically gifted in the league. Vander Esch will swiftly slide into a natural role. Gallup will also be able to take advantage of a depth chart that has an opening for a playmaker with Dez Bryant gone.

"Day 3 brought depth along the roster, too. Quarterback Mike White is an ideal backup, while receiver Cedrick Wilson and running back Bo Scarbrough were good enough to go several rounds higher. The biggest complaint to be had is that the Cowboys traded the younger, healthier slot receiver on the roster in Ryan Switzer instead of getting cheaper by moving Cole Beasley."

SB Nation
Grade: B+
Breakdown: "Leighton Vander Esch getting picked by the Cowboys was expected to happen if he was available, and that was the case. In him Dallas got a great athlete who can patrol the middle of the field. He’s an asset in coverage with his ability to read the quarterback and make a break on the ball.

"After the better tight ends were taken off the board by the time Dallas picked at No. 50, the Cowboys got good value in offensive lineman Connor Williams. He could fit at tackle or guard in the NFL, particularly if the Cowboys want to move La’el Collins inside.

"Colorado State wide receiver Michael Gallup was one of my favorite picks of the draft at No. 81. He’s not a direct replacement for Dez Bryant, but does a lot of the same things. Boise State’s Cedrick Wilson, taken at No. 208 overall is a nice speed player. Watch out for fourth-round pick Dorance Armstrong. He struggled last season, but his 2016 tape was good for a pass rusher."

Yahoo Sports
Grade: C-
Breakdown: "The Cowboys’ draft might be remembered for what could have happened. Linebacker Leighton Vander Esch, the first-round pick, is a good player but the Cowboys passed every receiver in their post-Dez Bryant world to get him. It seemed they were primed to grab tight end Dallas Goedert at No. 50 overall, but the Eagles traded to No. 49 and took him. The Cowboys took offensive lineman Connor Williams instead. The third round netted receiver Michael Gallup, a good prospect who will be under a lot of pressure because of the Cowboys’ need at the position. Stanford tight end Dalton Schultz became a necessity in the fourth round due to Jason Witten’s reported impending retirement, but he’s not a dynamic receiver. At some point the Cowboys are going to have to seriously invest in premium targets for Dak Prescott (and trading away slot receiver Ryan Switzer and trading for Rams bust Tavon Austin doesn’t meet that need)."

Sports Illustrated
Grade: C+
Breakdown: "Dallas’s biggest need was wide receiver—even before Dez Bryant’s release—but even with every WR still on the board, the team drafted Leighton Vander Esch with the No. 19 pick. He doesn’t fill an immediate need, as today’s nickel-package-driven NFL demands you have only two quality linebackers, so the Cowboys must really love him. Jaylon Smith wasn’t quite as dynamic last season as hoped, but if there’s still optimism for him in 2018 and beyond (and there should be), it reasons that Vander Esch is here to supplant Sean Lee. Though still elite, Lee is nearly 32 and has a long history of injuries.

"The day after Vander Esch arrived, future Hall-of-Famer Jason Witten retired, leaving a hole at tight end. The Cowboys may have been geared up to draft Dallas Goedert at Round 2, pick 17, but they got leapfrogged by division rival Philadelphia. Ouch. The “consolation prize” was tackle Connor Williams, a late-first or early-second-round prospect who may have been their target anyway. Instead of fixing weaknesses, the Cowboys will augment a super strength into a super, SUPER strength, adding Williams to what was already by far the NFL’s best offensive line. This could eventually move La’el Collins back to left guard, where he has shown a lot more promise. That would make one pick upgrading two positions.

"Third-rounder Michael Gallup has a chance to start right away, mostly due to the paucity of quality Cowboys receivers. Overall, this draft gave Dallas a lot of talent, but it did little to immediately improve a team that is ready to compete for an NFC East title right now."