Game-By-Game Prediction Of The Dallas Cowboys' Record For 2017 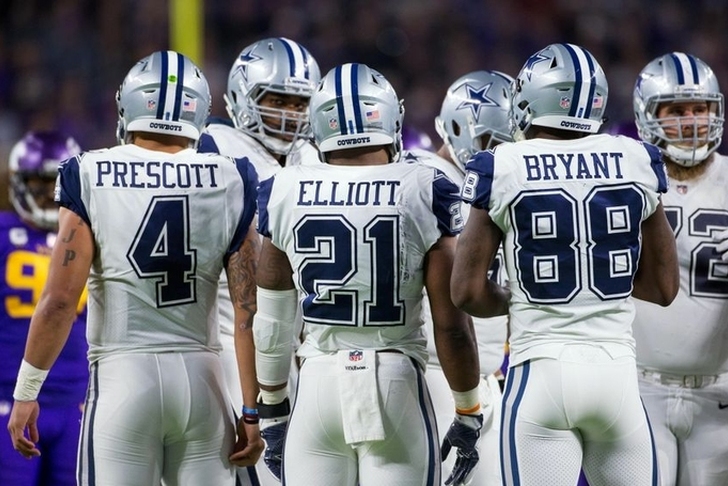 The Dallas Cowboys made the playoffs last season, but came up short in their Super Bowl bid. After overhauling the defense, especially the secondary, they are determined to get back to the playoffs and finish what they started last year. We got our first look at Dallas' road to the playoffs when their schedule was released a few weeks ago. The Cowboys are the favorite in the NFC East, and many are expecting another playoff berth. Here's a game-by-game prediction of the Cowboys' schedule this year:

The regular season woes from last year don't carry over. The Cowboys gut out a win against a solid Giants squad, whose offensive line problems come back to hurt them. The key for Dallas will be stopping WR Odell Beckham, Jr.

There's a QB quandary for Denver, as they'll have to decide to start either Trevor Siemian or Paxton Lynch. I think they'll actually start Lynch, but that won't be decided until the preseason ends. With the uncertainty at QB, I'll give Dallas the win. It will be a close one, however.

Another primetime game, this one on Monday Night. The Cardinals are a good team and they'll give the Cowboys a fight. But Arizona wasn't that great last year and the Cowboys should come out on top. There's a really chance the Cowboys don't start the season 3-0.

The Rams, with new head coach Sean McVay, are a year away from competing. Wade Phillips would love to beat Jerry Jones, but the Rams simply don't have the talent they. This game does end up being closer than expected, however.

The Cowboys can't quite get their revenge win against the Packers. The passing prowess of Aaron Rodgers and Co. proves too much and the Packers escape with a narrow victory.

The 49ers are rebuilding this year. Even on the road, the Cowboys come up with an easy win.

This starts a tricky stretch the Cowboys have over the next four games. It's a close one, but the Cowboys eek out a win behind a good game from Dez Bryant. He'll be looking forward to playing Josh Norman this year.

The Kansas City game was a real toss-up for me, since it is at home. But starting the year 7-1 seems unlikely, even for the Cowboys. I'll hedge my bets a bit here and give the Cowboys a narrow loss.

The Falcons should have won the Super Bowl last year and the team itself might be even better. On the road, the Cowboys come up short. Julio Jones has a monster day.

The Eagles are coming along, but I think they're still a year away. There still isn't enough of a running game and the secondary is raw. At home, the Cowboys pick up a win. This is a Sunday night game.

This is a potential upset game. The Chargers are better than their record indicated last year and the Cowboys are going from a Sunday night game to a Thanksgiving game on Thursday. Still, I like the Cowboys to win.

The Cowboys actually play back-to-back Thursday games, hosting the Redskins. The Cowboys pick up another win, but both Dallas and Washington play on the previous Thursday.

It's tough for me to see the Cowboys sweeping the Giants, barring a string of injuries. So, on the road, the Cowboys come up short.

I don't like this matchup for the Cowboys. The Raiders have a really good passing attack and it's on the road. I like Oakland to pick up a win and it might not even be that close.

This won't be an easy game, but the Seahawks had major trouble on the road last year. Provided that's the case again this year and the Seahawks' offensive line has problems again, the Cowboys will come out on top.

The Cowboys again close against the Eagles, but will this game carry any meaning this time? It didn't last year, but I'm assuming the Cowboys haven't locked up the No. 1 seed this time. An 11-5 or 10-6 record should be enough to get the Cowboys back to the playoffs.