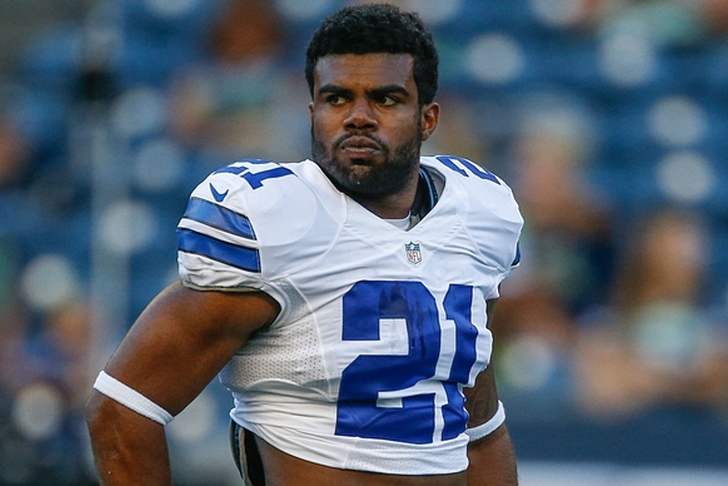 Dallas Cowboys running back Ezekiel Elliott was involved in an altercation at Clutch Bar in Dallas on Sunday night, according to 105.3 The Fan.

Dallas Cowboys star running back Ezekiel Elliott was reportedly involved in an altercation at a Dallas bar Sunday night.

According to The Fan’s Mike Fisher, the Dallas Cowboys are aware of a situation with Elliott that took place at Clutch Bar on Cedar Springs in Dallas.

A statement early Monday from the Dallas Police says, “We have not received information regarding an arrest.”

The NFL will take a look at, according to Fisher, “these are exact words from a source — ‘accumulative nature of Zeke’s behavior.’”

The NFL is still investigating domestic violence claims against Elliott from July 2016, and after reports that he had been told he was in the clear, Elliott is now bracing for a one- or two-game suspension.

This incident is just the latest in a long line of off-field troubles Elliott has found himself in during his short NFL career. Along with the domestic violence investigation (he was accused of beating a woman who he had a “sexual relationship” with in Columbus, Ohio), he visited a legal marijuana dispensary before a preseason game last year and was caught pulling down a woman’s top at a St. Patrick's Day Parade (consensually, apparently).

While nothing has resulted in any type of discipline yet, the league is looking at the "accumulative nature" of these incidents, as mentioned above.

Elliott led the NFL in rushing as a rookie last season, picking up 1,631 yards and 15 touchdowns on 322 carries.