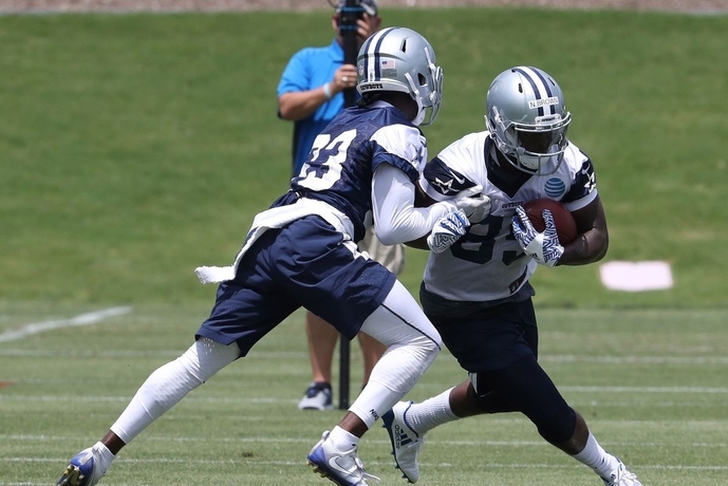 The Dallas Cowboys are through multiple practices of training camp and their first preseason game is less than a week away. Several players look sharp thus far, but there are some injury concerns. Here are all the latest Cowboys rumors and news from training camp.

Secondary Looks Sharp
The Cowboys overhauled their secondary this offseason, so it's a good thing the unit is drawing praise from reporters. Here's what David Helman of dallascowboys.com reports.

"I’m about to state the obvious if you’ve been following along with our coverage, but this new-look secondary has had an impressive start to camp," Helman writes. "We knew going in that all eyes were going to be on Chidobe Awuzie, the No. 60 overall pick in the draft. So far, he is delivering on the hype with a pair of interceptions and another pair of deflected passes in just two padded practices. It’s only two real days of work, but it’s exciting to see him moving around the formation, handling different duties – and handling them well. Fellow rookie Marquez White is also off to a strong start, as he has looked physical and unafraid in one-on-one matchups as well as full-team repetitions. With all of that said, we haven’t even seen Jourdan Lewis yet – so his arrival will be another fun development to watch. Obviously, the rookies are the big talking point, but the veterans deserve some mention, too. Anthony Brown nabbed the first interception of training camp when he picked off Dak Prescott on Thursday morning. Orlando Scandrick also had a really strong first day of practice, as he got the better of Dez Bryant on multiple occasions. It’s incredibly early, but it’s encouraging to see a strong start from a position group that’s facing a lot of scrutiny heading into 2017."

ESPN's Todd Archer also mentions Awuzie, a player it's safe to call the most impressive of the rookies so far. UDFA DL Lewis Neal has also captured Archer's eye and he could be the next UDFA to make the roster. But back to Awuzie, the Cowboys are getting him work at multiple positions: safety, nickel corner and both outside corner spots. That's a lot for a rookie to handle, but he seems to be handling it thus far.

Switzer Injury
There were some concerns for Cowboys fans when rookie WR Ryan Switzer went down with a hamstring injury during practice Thursday. The good news is it doesn't appear serious. Head coach Jason Garrett told the Fort Worth Star-Telegram that the injury to Switzer (and the hip flexor of DT Maliek Collins) were both day-to-day injures. With the regular season still six weeks away, the Cowboys won't rush or risk further injury to either player. Expect them to be brought along slowly, with a good chance they won't play much, if at all, in the Hall of Fame game next week.

QB Shuffling
QB Zac Dysert, claimed off waivers earlier this offseason, suffered a back injury that will cost him the season. As a result, QB Luke McCown has been signed to serve as at least a preseason camp arm. McCown, the brother of Josh McCown, has been in the NFL since 2004, mostly as a backup. He's played for the Saints the last four years before cutting get in April. His best moment came in 2015, when he subbed in for the injury Drew Brees and completed 31 of 38 passes for 310 yards in a loss. McCown could push Kellen Moore for the backup QB role. Dysert, by the way, has been waived with the injury designation. If he clears waivers as expected, he'll be placed on IR.

Check out our Dallas Cowboys page for all the latest Cowboys Rumors or download the Chat Sport App!