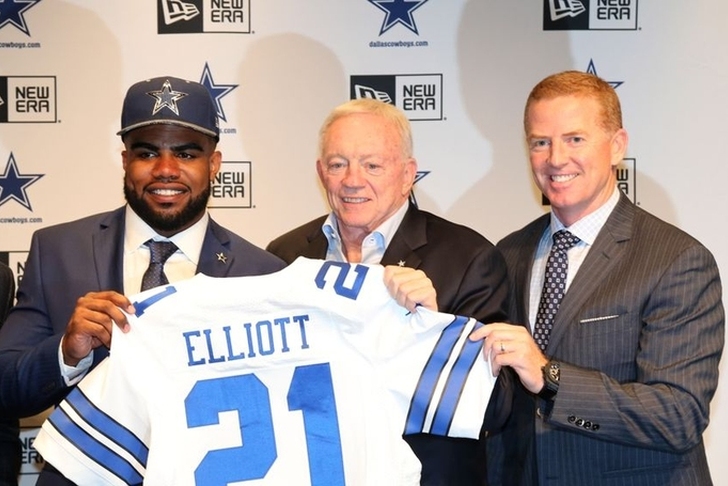 The Dallas Cowboys are still wait until for the NFL to make a decision on the investigation into running back Ezekiel Elliott. That decision reportedly won't come this week, but owner Jerry Jones expects good news once it is announced.

Jerry Jones on Ezekiel Elliott: "I do not anticipate a suspension."

The NFL started its investigation into Elliott not long after he was accused of domestic violence on July 22nd, 2016. Police did not press charges against Elliott, thanks in large part to witness testimony dispute the alleged victim's account. However, that incident wasn't the only one the NFL looked into, Jones confirmed.

Elliott also visited a marijuana dispensary in Seattle, which is legal, during the preseason. In March of this year, Elliott was filmed pulling down a woman's shirt and exposing her breast at a St. Patrick's Day parade. Nothing came of that incident either, as the woman continued to hang out with him afterward.

The most recent incident came in July, when Elliott was connected to an assault at a bar. But police never tied Elliott to the investigation and have suspended the case because the victim didn't give them an accurate address or phone number.

Still, that's multiple incidents Elliott has been involved in. Despite the lack of charges, it's not a good look for one of the NFL's brightest young stars. But what remains to be seen is if the NFL will elect to discipline Elliott and hit him with a suspension. If that's the case, Jones, the Cowboys, Elliott and the NFLPA could elect to fight the suspension.

Check out our Dallas Cowboys team page for all the latest Cowboys rumors or download the Chat Sports App!