The Dallas Cowboys rumors on today’s Cowboys Report include if the Cowboys will pursue Earl Thomas only if the price is right, the latest on contract negotiations between DeMarcus Lawrence and the Cowboys, if Randy Gregory will make a return to the Cowboys in 2019 & if Cole Beasley is worth $20 MM guaranteed. 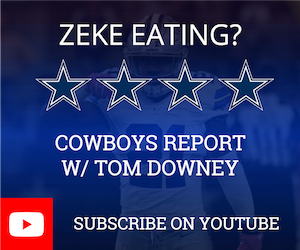 In other Cowboys rumors, would Dak be the #1 pick in this year’s draft? Will Jason Garrett be the head coach of the Cowboys for decades to come? Find out on the latest edition of the Dallas Cowboys Report with Tom Downey!

Check out the complete list of Cowboys rumors below and in the latest edition of the Dallas Cowboys Report with Tom Downey:- Earl & Cowboys only at right price?
- DeMarcus & Dallas Not Close?
- $20 MM guaranteed is too much for Beasley?
- Randy Gregory Return?
- Dak Would Be #1 Pick?
- Garrett “longest-tenured Cowboys coach ever?”