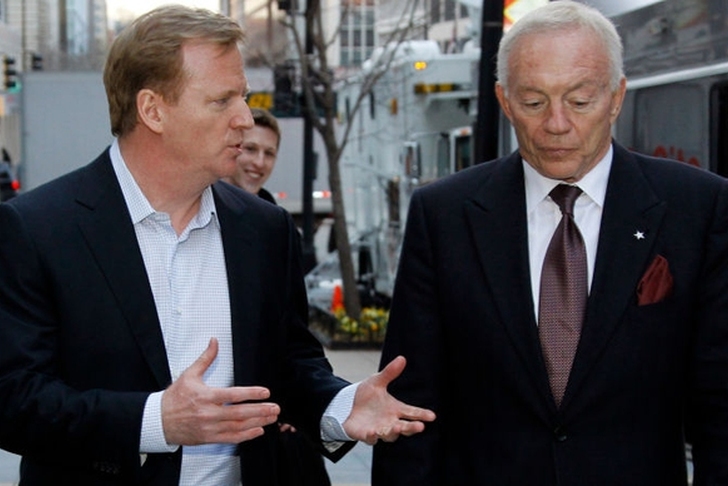 The latest battle between Roger Goodell and Dallas Cowboys owner Jerry Jones is over, with Goodell coming out on top. The NFL revealed today that the dispute between Jones and Goodell (i.e. the other NFL owners) over legal fees was resolved and the details have come out. Per Adam Schefter, Jones has reimbursed the NFL for over $2 million in legal fees.

Other NFL owners and Goodell wanted Jones to pay the NFL over $2 million in legal fees as a result of Jones threatening to sue over Goodell's contract extension and for legal fees from the Ezekiel Elliott court cases.

Jones had a meeting on Monday with Goodell, which apparently wasn't enough to reduce or eliminate the fine. It's a surprise to some, since there's no indication that the NFL made Robert Kraft pay for Tom Brady's court case.

Over 20 years ago, the NFL’s constitution was amended to give the commissioner power to get reimbursement from a team "initiates, joins, has a direct, football-related financial interest in, or offers substance assistance to any lawsuit or other legal, regulatory or administrative proceeding against the league."

While the Cowboys filed a declaration of support for Elliott and the team lawyer was at the court hearings, Jones argued the team did not have any part in paying for Elliott’s legal costs. The Patriots, meanwhile, filed an amicus brief for Brady and had an affidavit signed by owner Robert Kraft. That would represent stronger court support than Jones and the Cowboys.

Of course, Kraft wasn't as vocal in the court process as Jones was. Jones was under the impression Elliott would face no discipline and was livid. On top of that, Jones was outspoken and threatened to sue the NFL if Goodell received a massive contract extension, which Goodell did. It's also worth mentioning that Goodell had the support of other NFL owners, who might have wanted to get Jones back in line. A $2 million legal fee (originally reported as a fine), is one way to ensure that.