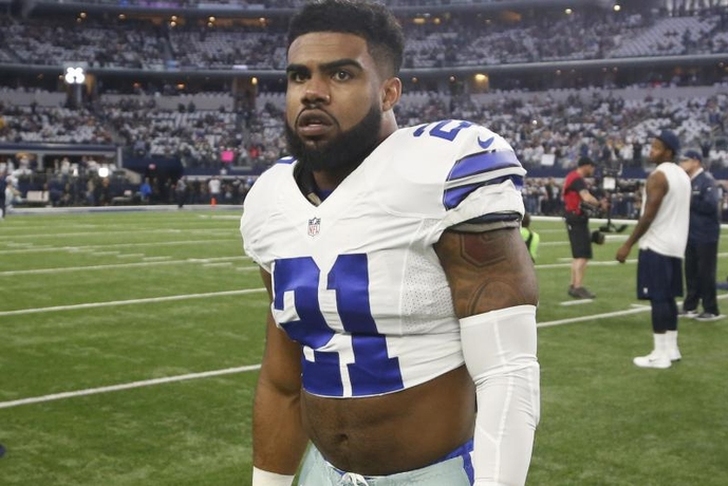 Dallas Cowboys running back Ezekiel Elliott will begin the official appeal of his six-game suspension on Tuesday and plans to focus his case on statements made by his ex-girlfriend, including that she threatened to "ruin his career" when he discontinued his relationship with her, according to the Fort Worth Star-Telegram.

His ex-girlfriend, Tiffany Thompson, accused Elliott of several incidents of domestic violence against her, including one on July 22, 2016 in which she called police. The league started its investigation into Elliott not long after that alleged incident. Police did not arrest or press charges against Elliott, thanks in large part to the testimony of four witnesses disputing the alleged victim's account.

However, the league continued with their own investigation and says they have evidence “that [Elliott] engaged in physical violence against Ms. Thompson on multiple occasions during the week of July 16, 2016.”

Elliott has adamantly denied the allegations made by Thompson and has text evidence that she encouraged friends to lie to NFL investigators. The Fort Worth Star-Telegram also reports that Thompson threatened to "ruin" Elliott's life and that she would end his career on multiple occasions, including a racially-charged statement.

“You are a black male athlete. I’m a white girl. They are not going to believe you.”

The league has acknowledged that the alleged assault on July 22 didn't occur, but says they have evidence that he committed acts of domestic violence on three separate occasions in the week prior.

Elliott continues to deny that any domestic violence took place and points to the fact that Thompson did not make any accusations against him until she was not allowed into his 21st birthday party following the end of their relationship.

His lawyers responded to the suspension by saying the NFL “cherry-picked” evidence with “factual inaccuracies” while “ignoring other critical evidence.”

Elliott has been involved in several other incidents since being drafted in 2016, including visiting a marijuana dispensary in Seattle, which is legal, during the preseason. In March of this year, Elliott was filmed pulling down a woman's shirt and exposing her breast at a St. Patrick's Day parade. Nothing came of that incident either, as the woman continued to hang out with him afterward.

The most recent incident came in July, when Elliott was connected to an assault at a bar, but police never tied Elliott to the investigation and have suspended the case because the victim didn't give them an accurate address or phone number.