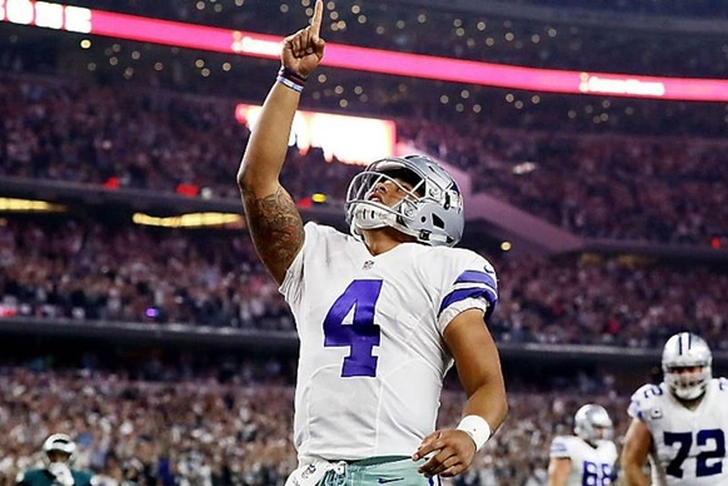 The Dallas Cowboys quickly put an end to any talk about them faltering down the stretch, bouncing back from just their second loss of the season to grab the 26-20 victory over the Tampa Bay Buccaneers. The loss ended Tampa's five-game winning streak.

Prescott, in particular, had one of his best games of the year amidst some calls for him being benched in favor of Tony Romo, completing 32/36 passes for 279 yards while rushing for 22 yards and a touchdown. His team followed suit, and after a slow start, found a way to win the game in the fourth quarter.

After trading field goals, the Cowboys found the end zone first when Ezekiel Elliott rushed up the middle - and celebrated by jumping in the giant Salvation Army pot:

Dallas followed that up with a two-yard touchdown run from Prescott to build a 17-3 lead, and it looked like they were going to run away with this one. However, that was not the case.

Tampa Bay scored 17 straight points in the next 13 minutes, capped by this incredible touchdown catch from tight end Cameron Brate.

That gave the Bucs a 20-17 lead going into the fourth quarter, but then it was the Cowboys' turn to regain momentum again. Their defense stepped up and kept Tampa Bay from really threatening in the final frame, and Dan Bailey added three of his four field goals in the fourth to give Dallas the victory.

Elliott led the way for the Cowboys along with Prescott, rushing for 159 yards and that touchdown on 23 carries while catching three passes for another 29 yards. Dallas can clinch the NFC East and the top seed in the NFC with a win next Monday against the Detroit Lions.

Tampa Bay led by Jameis Winston, who threw for 247 yards and two touchdowns - but also threw three interceptions and lost a fumble. The loss drops the Bucs to 8-6 on the year and into a heated race with the Redskins and Packers for the final wild card spot.