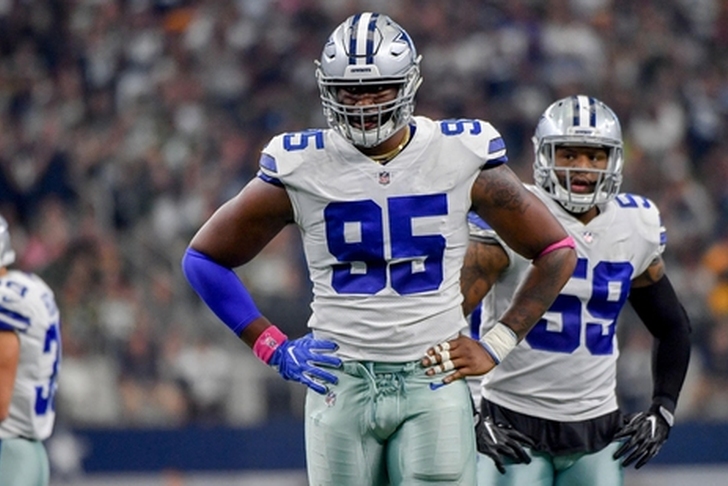 The offseason is in full swing for America's Team and that means the rumor mill is cranking for the Dallas Cowboys. While much of the focus to this point in the offseason has been on filling out the coaching staff, the team is now switching their attention to free agency ahead of the start of the new league year in mid-March. As such, here are the latest Cowboys free agency rumors you need to know:

Cowboys to let David Irving walk?
Cowboys defensive end David Irving has carved out a crucial role with Dallas' defense but is a restricted free agent this offseason, and there's a good chance the team lets him walk, according to Cowboys Wire.

The idea Dallas is willing to let Irving walk seems to be spreading. On their latest Trust the Tape podcast, 105.3 The Fan’s Jeff Cavanaugh and draft expert Dane Brugler discussed the possibility.

When going through Brugler’s mock draft, the topic of the defensive line of Dallas came up when he sent 3-technique Maurice Hurst to the Cowboys.

Cavanaugh: “I think on that one it will depend… you’ll know ‘David Irving’ things before the draft. Right? He’s a restricted free agent and if somebody signs him to a deal and the Cowboys take their pick and let him walk…”

Brugler: “I think there’s a good chance that happens.”

Cavanaugh: “Then I could see that pick.”

Brugler: “Yeah, and there’s a good chance that happens.”

Irving had 22 tackles with seven sacks and a forced fumble in eight games last season.

Will new coaching hire give the Cowboys a better chance to get Earl Thomas?
Dallas has hired former Seattle Seahawks defensive coordinator Kris Richard to be the team's secondary coach and passing game coordinator, and that only strengthens the Cowboys' chances of landing Seahawks safety Earl Thomas when he hits the open market next season (if not before), according to The Seattle Times.

The hiring of Richard by Dallas may raise some angst among Seahawks fans about the future of free safety Earl Thomas, who can be an unrestricted free agent following the 2018 season and memorably let it be known last month that if he is ever “kicked to the curb” by Seattle he wants the Cowboys to pick him up. Richard was with Thomas for all eight seasons of each of their Seattle careers to date, each arriving in 2010.

Thomas had 88 tackles with two interceptions this past season.

Cowboys Report: The Latest Dallas Cowboys Rumors And Notable Players Who Could Be Cut

Colts planning to sign Anthony Hitchens away from Cowboys
Linebacker Anthony Hitchens is set to be a free agent this offseason, and with Dallas giving big contracts to some of their other players, they're expected to let him hit the open market once the new league year starts.

Once he's there, the Indianapolis Colts are hoping to scoop Hitchens up, according to Newy Scruggs of The Dallas Morning News.

"The Cowboys could find themselves being outbid for linebacker Anthony Hitchens," Scruggs said. "He is not going to give the club a hometown discount. The Colts have a lot of salary cap space and Matt Eberflus is expected to become their defensive coordinator under Josh McDaniels. McDaniels is reportedly set to be their new head coach after the Patriots' season ends. The Colts have $84 million in salary cap space and need defensive help. If I'm Eberflus, I want to get a player who I know and who knows my scheme. I expect them to give Hitchens a contract the Cowboys can't afford to match."

Hitchens, 25, racked up 84 tackles with a forced fumble in 12 games last season.