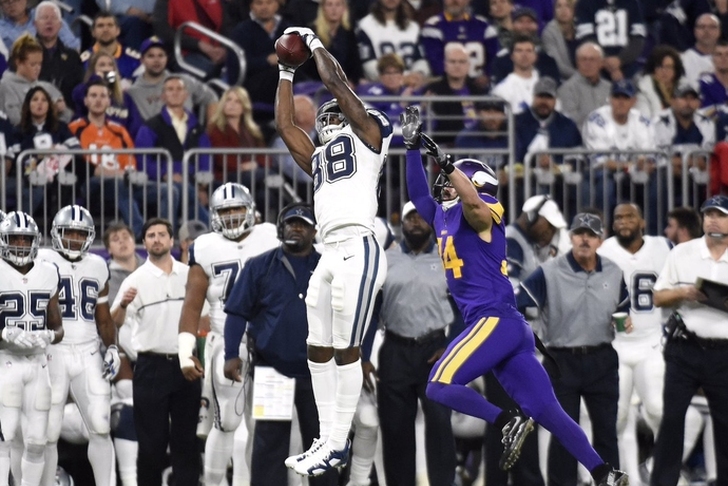 There wasn't much scoring or offense, but the Dallas Cowboys will gladly take the win Thursday. The Minnesota Vikings gave the Cowboys a heck of a game, but didn't have enough offense in a 17-15 loss. The Cowboys are now 11-1, with a magic number of one to clinch a playoff spot. The Vikings fall to 6-6 and their playoff hopes took a hit with the loss.

The Vikings were up 9-7 in the fourth quarter, but a fumble on a punt gave the Cowboys their first takeaway since October. On the very next play, Dak Prescott found Dez Bryant to give the Cowboys a lead they wouldn't give up.

The Vikings had a chance to tie with about two minutes to play and no timeouts. The Vikings managed to score, via a 3-yard TD pass from Sam Bradford to Jerick McKinnon, but failed to convert the two-point conversion. A false start on the Vikings on the two-point try killed the Vikings, and the Cowboys were lucky to avoid a blow to the head of Bradford that should have been called.

The Vikings defense was fantastic for almost all of the night, limiting Dallas to just 265 yards of offense. They bottled up Ezekiel Elliott, pressured Prescott and got the high-powered Cowboys offense off the field. The Cowboys offense, which was number one in time of possession, lost that battle 33 minutes to 26. But, it wasn't enough, thanks to an anemic Vikings offense.

Ezekiel Elliott just didn't have much running room, until late in the 4th. He had a TD, plus 86 yards on 20 carries, with a 30-yard gain providing a big chunk.

Prescott played well, completing 12 of 18 passes for 139 yards and chipping in a key 38 yards on the ground. He was sacked three times though. Bryant was key, catching four passes for 84 yards and a score.

The Cowboys and Vikings will both benefit from a few extra days off before playing next Sunday. The Cowboys visit the New York Giants, while the Vikings visit the Jacksonville Jaguars.