Halftime Quick Hitters: St. Louis Leads Dallas 21-10 At The Half 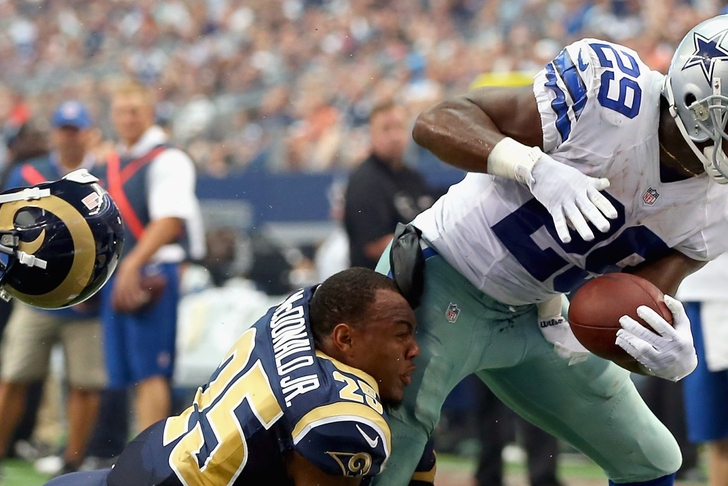 Both the St. Louis Rams (1-1) and Dallas Cowboys (1-1) were looking to build off the positive momentum of Week 2 victories, as the two teams locked horns at the Edward Jones Dome in St. Louis.

Austin Davis' Energy Is Infectious: Already the subject of his own internet meme after his sideline-stalking primal scream during the Rams' Week 2 victory over the Bucs, QB Austin Davis is the ultimate underdog story. This guy even had to walk on to get a chance with the Southern Miss Golden Eagles back in 2007.

Fast forward seven years later, and Davis looked like a true NFL starting quarterback on St. Louis' opening drive, as he led the Rams 80 yards on 15 plays (finished off with a 1-yard touchdown pass to Lance Kendricks) to give the Rams a 7-0 lead early.

A Mistake Haunts The Cowboys: The Cowboys were well on their way to an answer of Davis' opening statement on their first possession until trouble came knocking. Down at the St. Louis 45, a Tony Romo swing pass to DeMarco Murray picked up nine before Murray fumbled it away to the Rams' Alec Ogletree - killing the drive where it stood.

Murray's third fumble of 2014 would prove costly, as Austin Davis would find new fantasy-football favorite, WR Brian Quick, for a 51-yard TD strike to give the Rams a 14-0 lead at the beginning of the 2nd quarter.

The Dreaded Pick Six: One Cowboys' mistake was enough to make their loyal fans cringe. This next one really hurt.

Tony Romo attempted to create something out of nothing on a 3rd-and-long throw to WR Dez Bryant. That something ended up in a touchdown...for the Rams. Janoris Jenkins would read the throw beautifully and waltz into the end zone to put the Rams up 21, and to throw Cowboys Nation into a state of disbelief.

Some Late Hope For Dallas: DeMarco Murray wasn't ready to let a crucial fumble be the story of his first half as he rushed for 37 yards on five carries on a counterpunch drive for the Cowboys. He would dive in from a yard out to put Dallas on the board, and keep hope alive for the Cowboys.

The Cowboys would get another crack on offense after a Scott Wells botched snap, and would get a field goal out of it on the half's final possession to make it 21-10.