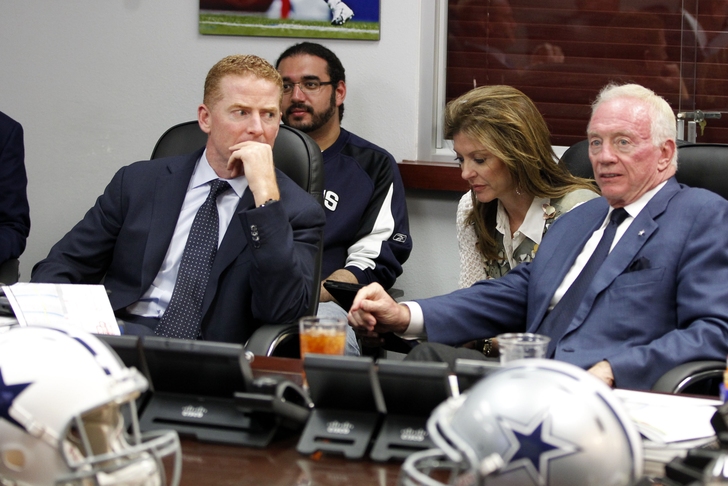 For the third straight year, Dallas finished 8-8 and missed the playoffs. The Cowboys battled through several injuries, especially on the defensive side on the ball. It remains to be seen if Monte Kiffin will return to coordinate a defense that was one of the worst in the NFL last season. The Cowboys are already $22 million over the cap, and will need to restructure contracts, get players to take pay cuts and release players. They will be able to get under the cap, but have several needs on the defensive side of the ball. As demonstrated when the injury bug struck, the team lacks depth across the board.

1. Defensive Tackle: Jason Hatcher was arguably the team’s most consistent player, but he is a free agent. Given Dallas’ cap issues, the team might not be able to afford to bring Hatcher back. Nick Hayden is the other starter. The ‘Boys need at least one DT, even if they re-sign Hatcher.

2. Safety: The Cowboys have lacked a playmaking safety since Darren Woodson retired. Finding one would greatly help the Cowboys defense. Barry Church is a serviceable starter, but isn’t a game-changer. J.J. Wilcox and Jeff Heath were inconsistent as rookies. Danny McCray is best on special teams, while Matt Johnson has been unable to stay healthy.

3. Defensive End: Anthony Spencer is a free agent and I’d be surprised if Dallas brought him back. George Selvie played well after being signed off the street, but an upgrade and depth are still needed. Getting Tyrone Crawford back and healthy will help, but he is still an unknown at this point.

4. Offensive guard: Ron Leary and Mackenzy Bernadeau are serviceable starters, but the team needs depth, if not improvement at both spots. Brian Waters will turn 37 and might retire.

5. Quarterback: Tony Romo is the starter for the foreseeable future, but he is 33 and coming off two back surgeries in the past two offseasons. Although he was having one of his best seasons before getting hurt, Dallas should spend a mid-round pick on a quarterback to groom for the future. Kyle Orton is a serviceable backup, but is not the QB of the future. A mid-round developmental pick would make sense.

Ha Ha Clinton-Dix, S, Alabama: I view Clinton-Dix as the best safety prospect in this draft, and he has one of the best names in this year’s draft. He does everything well: run support, pass coverage and even special teams. However, there is a solid chance that Clinton-Dix will be off the board before Dallas picks.

Calvin Pryor, S, Louisville: Pryor isn’t the player Clinton-Dix is, but in a poor draft for safeties, he is easily the second-best prospect. He needs work on his pass coverage, but should still be a high draft pick. I view him as an early second round talent, but don’t be surprised if he goes in the first round. I think he’ll be drafted between Dallas’ first and second round pick.

Ra’Shede Hageman, DT, Minnesota: Hageman is a freak athlete and a far better fit for the Cowboys current defense than a player like Louis Nix. Hageman is talented, but raw and has moments where he seems to lack effort. If anyone can maximize his talent, it is defensive line coach Ron Marinelli. Hageman might not be on the board when Dallas drafts.

Will Sutton, DT, Arizona: Sutton is undersized for a defensive tackle and struggled at times this season. However, he has a great first step and would fit well in Dallas’ defense. The Cowboys might get lucky and have Sutton fall to them in the second round.

Kony Ealy, DE, Missouri: Ealy is another risk-reward type player. He has the physical tools, but is still raw. He should be a first round pick, and is the type of player who will rise as the Draft nears. If he blows up the Combine, like I think he will, he could be drafted before the Cowboys pick.

Aaron Lynch, DE, South Florida: Lynch transferred to South Florida from Notre Dame after his freshman year. He is talented, but struggled during his only year at South Florida. Dallas might be able to get him in round three or four if he slips.

Jimmy Garoppolo, QB, Eastern Illinois: Garoppolo isn’t a name many have heard, but he is talented. He has an incredibly fast release and reminds me a lot of Tony Romo. The more tape I watch of him, the more I like him. He still needs some work, but could go as early as the second round. His height and hand size will be key in determining how high he goes. If Dallas can find a way to get him in the third or fourth round, the Cowboys have to consider pulling the trigger.

Aaron Murray, QB, Georgia: Murray has several key deficiencies (arm strength, size and is coming off a knee injury), but he has the potential to be a starter. He won’t be an elite starter, and has one of the lower floors among the QBs in the draft, but could develop into a serviceable starter. If the Cowboys can get him in round 5 or so, they should consider it.

Gabe Jackson, OG, Mississppi State: Jackson is a one of the better guard prospects in the draft and a very good fit for Dallas’ zone blocking scheme. I think he goes in the second round, but if he manages to slip to the third round, Dallas might have to pull the trigger.

Kadeem Edwards, OG, Tennessee State: One of the more unheralded players participating in the Senior Bowl, Edwards should be a mid-to-late round developmental pick.