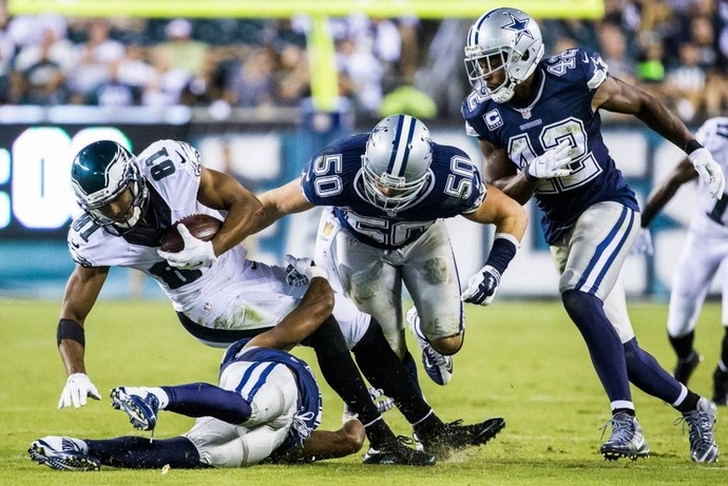 The Dallas Cowboys may have lost Tony Romo to a broken clavicle in Sunday's victory over the Eagles, but they're 2-0 and are looking to continue that undefeated start on Sunday against the Falcons. Here are three reasons why they'll do just that:

The Cowboys have been sneaky good on the defensive side of the ball, ranking 6th in scoring defense after allowing just 18 points per game through their first few games and third in total yards allowed. This unit will have to carry Dallas given the injuries to Tony Romo and Dez Bryant, and they've shown they have the ability to do so.

2) Atlanta has been more lucky than good to this point

Atlanta has pulled off two fourth-quarter comeback victories against the Philadelphia Eagles and New York Giants, both of whom haven't won a game yet. Dallas is certainly a step up in competition, and their lack of a running game (80.5 yards per game, 22nd in the league) will hurt them a lot early in this one. If the Cowboys hold a lead in the first half, they won't collapse late like the Eagles and Giants have.

The NFL hasn't seen an offensive line this stacked since the Cowboys' dynasty in the 1990s. Tyron Smith, Travis Frederick and Zack Martin are all among the best at their positions. Doug Free and Ronald Leary both played well last season. Leary might even lose his job to La'El Collins, a first round talent who went undrafted. The Cowboys even spent a third round pick on Chaz Green to be their swing tackle of the future.

Their dominance has made Joseph Randle a featured back, and they'll keep Brandon Weeden upright, giving them the best chance to win despite the many injuries Dallas has suffered. The flash in the Cowboys' attack may be gone, but the grit and grind is there and better than ever.