'I think it's unfair': David De Gea SLAMS penalty rules after Crystal Palace fiasco saw re-take scored when the Spaniard was judged to have crossed the goal-line as he saved Jordan Ayew's first effort 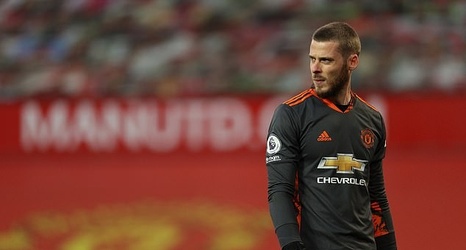 David De Gea has joined the ranks of VAR detractors, hitting out at the technology for an 'unfair' ruling that cost Manchester United at Crystal Palace.

In the 74th minute at Selhurst Park the Spaniard was in the way of Jordan Ayew's weak spot-kick after Victor Lindelof was penalised for a dubious handball.

De Gea pounced on the ball and rushed out to start an attack but play was brought back again, with VAR ordering the referee to award a re-take because the keeper had leaned in front of his goal-line before Ayew connected with the ball.