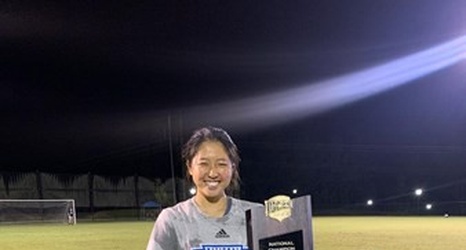 Evans, Ga. -- Hitomi Yamaue will bring some hardware with her to Omaha as she and her Tyler JC teammates claimed the NJCAA National Title on June 8th, completing an undefeated at 18-0. Yamaue earned the defensive MVP, helping the Apache defense allow just one goal in four matches during the NJCAA Division I National Championships (June 3-8).

Yamaue, who signed with the Bluejays in December of 2020, claimed back-to-back National Titles with Tyler JC. She closed her two seasons in Texas with 39 starts in 40 matches, sending in three goals and six assists.