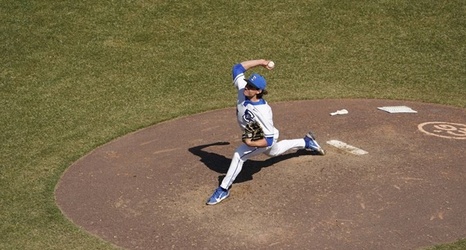 OMAHA, Neb. – Creighton scored four runs in each of the first two innings and Dominic Cancellieri took a no-hitter in the sixth inning as the Bluejays posted a 12-1 victory over Georgetown on Saturday, April 9 at Charles Schwab Field Omaha.

Cancellieri matched his season-highs in innings pitched (6) and strikeouts (8) while dominating on the mound as Creighton won his seventh straight start. He retired the first seven men he faced before a full count walk to Andrew Bergeron in the third inning, then set down the next 10 men before issuing a full count walk to Jake Hyde with two outs in the sixth.