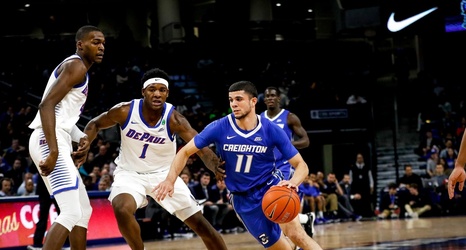 CHICAGO, Ill. -- Five men in double-figures, led by 19 from Mitch Ballock, helped the Creighton men's basketball team win an 83-68 decision on Wednesday night at Wintrust Arena. It's Creighton's 11th straight win over DePaul, with all but one of those coming by double-figures.

Creighton improved to 15-5 on the year and 4-3 in BIG EAST play. Creighton has now beaten DePaul in Chicago each of the last seven years. The only other time Creighton beat the same school seven straight seasons on the road was against Grinnell from 1929-30 to 1935-36. DePaul slipped to 13-6 overall and is 1-5 in league play.