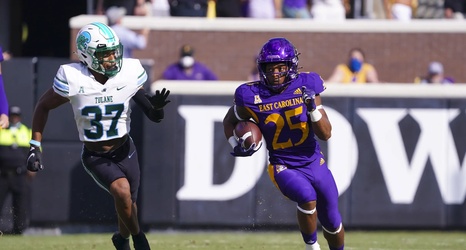 The Pirates (3-2) came into their AAC opener with Tulane riding a two-game win streak but were still underdogs at home against the Green Wave (1-4). A narrow victory over FCS Charleston Southern last week had some doubting if ECU could hang with the Wave. After all, the Pirates had yet to beat Tulane since Willie Fritz became the head coach. With all those questions swirling on Saturday, East Carolina running back Keaton Mitchell picked an excellent time to have a career game.

It was clear early on what kind of day it would be for Mitchell. On his first carry of the game he scampered 62 yards and helped set up the Pirates for a quick field goal, giving them the lead they would never relinquish.