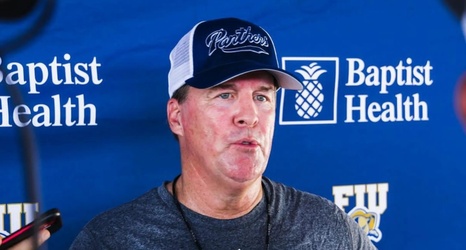 While there’s no shortage of questions surrounding the 2022 FIU football team, one thing was made abundantly clear at the start and throughout the first practice of the fall — there will be no walking on the field as long as Mike MacIntyre has a say in it.

Promptly at 8 AM, the sound of a whistles bellowed throughout the practice fields so loudly that they could be heard throughout the entire southwest corner of campus by passersby.

Equally as booming was the sound of MacIntyre and his staff directing traffic as the first fall camp under the direction of he and athletic director Scott Carr began — affectionately known as the start of a “A New Day” for a Panthers’ program that are looking to put last year’s 1-11 season and a combined 1-17 record since an 2019’s upset victory over Miami behind them.