FIU Football: A Passion for Sports and Education brings Katie Bason to Miami 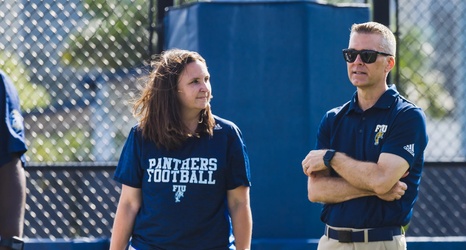 For almost four months, Katie Bason sat at home, unemployed and waiting on a call from a football coach about a job that didn’t yet exist. She turned down a more stable career path in the form of offers from Silicon Valley heavyweights such as Google and Apple. She even once performed as “Orbit” the mascot for the Martinsville Astros — a creature who’s modeled after its MLB namesake — a lime-green alien with antennae that stem from it’s head.

Call it an unabashed love for sports — in addition to having blind faith in a man she had known only 90 days — but it’s called optimism in any language.