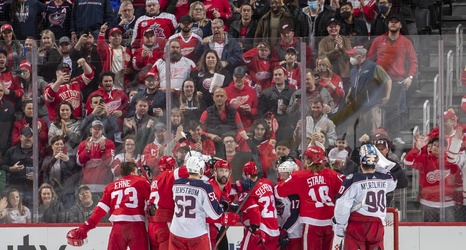 Following three straight home-and-home series, and the signings of TTUN’s Kent Johnson and Nick Blankenburg, the Jackets picked up their new teammates in Detroit as they faced the Red Wings. Let’s break it down!

The first few minutes were decently even. Merzlikins and Nedeleljkovic starting off the period by both screwing up attempts to play the puck, but were able to escape with zeros in the GA column. The Wings were able to get a few chances early, with a couple low, cross-crease chances jumping over their sticks. Both would have likely been goals if they connected.