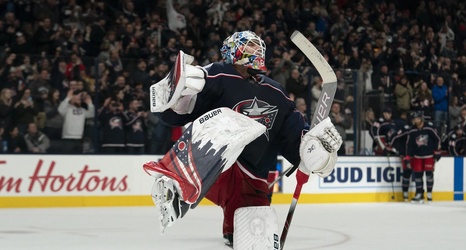 In a surprise announcement Tuesday afternoon, the Columbus Blue Jackets made public a five year extension for goalie Elvis Merzlikins. The Latvian has spent the last two seasons in Columbus where he boasts a .920 save percentage and 2.54 GAA over the span of 61 games.

The new deal carries a $5.4 million salary cap hit through the 2026-2027 season. Elvis Merzlikins now becomes the Blue Jacket with the second longest signed contract, behind only Zach Werenski, who is signed through 2027-2028.

Elvis has spent most of his tenure splitting time with Joonas Korpisalo.