CSU volleyball: Taking a knee for a cause beyond the game 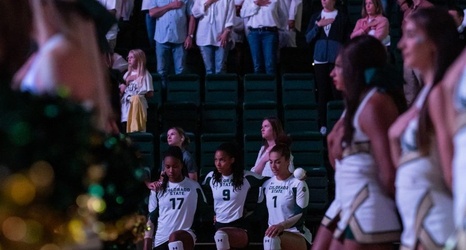 In a symbolic act of resistance to racism, one kneels instead of standing during the performance of the national anthem or at other appropriate moments.

This movement originated when Colin Kaepernick, soon joined by then-San Francisco 49ers teammate Eric Reid, kneeled during the playing of the national anthem before a football game in 2016. Since that time, leagues, professional teams and well-known athletes all around the country have taken the initiative to kneel in support of a much larger message, including three volleyball players from Colorado State University.

Kennedy Stanford, Malaya Jones and Naeemah Weathers first began taking a knee back in 2020 during the COVID-19 pandemic, mass civil rights movements and the death of George Floyd.