Rockies drop fifth straight in loss in Philadelphia, with first-inning homer by Phillies’ Scott Kingery the difference this time 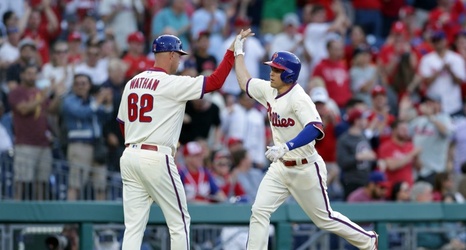 PHILADELPHIA — Unlike in recent losses, there was no bullpen disaster Tuesday night as the Rockies opened an important six-game road trip against the Phillies, furiously attempting to fend off an ugly early June swoon.

Instead, Colorado’s fifth straight defeat in a 5-4 affair was dictated by one misplaced two-out, first-inning pitch by Jon Gray as well as an effective showing by the Philadelphia pitching staff, which was tagged for 11 hits but survived a ninth-inning Rockies’ comeback.

Gray’s erratic way to open the game via two walks set the table for shortstop Scott Kingery’s 401-foot homer to left on a 1-2 count.