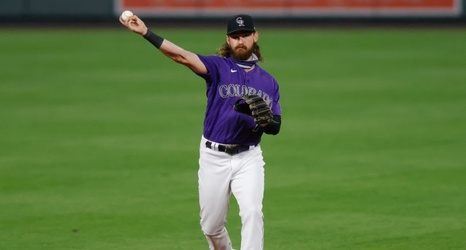 DENVER, CO - AUGUST 19: Brendan Rodgers #7 of the Colorado Rockies throws the ball to first while warming up during the eighth inning against the Houston Astros at Coors Field on August 19, 2020 in Denver, Colorado. The Astros defeated the Rockies for the third straight game, winning 13-6. (Photo by Justin Edmonds/Getty Images)

Colorado Rockies manager Bud Black provided an update on injured infielder Brendan Rodgers prior to the Rockies finishing a three-game road series against the Los Angeles Dodgers on Thursday.

Rodgers has been on the shelf since injuring his hamstring during a stolen base attempt in a spring training game on March 13.