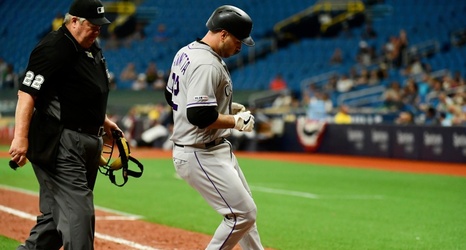 ST. PETERSBURG, Fla. — Not long after he hit a solo home run in the 11th inning Wednesday to lift the Rockies to a 1-0 victory over Tampa Bay, Chris Iannetta took the opportunity to speak his mind about critics who’ve made a big deal out of the Rockies’ slow start at the plate this season.

“Everyone outside this clubhouse was hitting the panic button,” the veteran catcher said. “I think everyone wanted everyone traded, sent down, contracts retracted, shot by firing squad.

“I mean, it’s just one of those things where we haven’t even been home yet and everyone was ready to jump off the bandwagon.