10-man Rapids side gets come-from-behind win in Minnesota 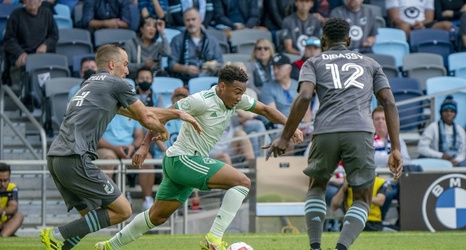 It wasn’t a “must-win” game for the Colorado Rapids but as the top spots in the Western Conference tighten, the Burgundy Boys need as many points as they can get. And tonight at Allianz Field, a 10-man Rapids side came back and beat Minnesota United FC 2-1.

The first half was slow and Colorado went down early in the 8th minute. Minnesota’s Adrien Honou took a shot that went through both Danny Wilson and Auston Trusty’s legs, blocking William Yarbrough’s view and landing in the back of the net.

The Rapids struggled to get anything going and then had several great shots in the last 15-ish minutes of the game: Younes Namli had two shots in the 26th minute (one was barely off-frame while the other was saved by Minnesota goalkeeper Tyler Miller, Collen Warner blasted a shot in the 30th minute, then Namli tried again in the 43rd and Jack Price had a knuckling shot in the 43rd minute that Miller also saved.