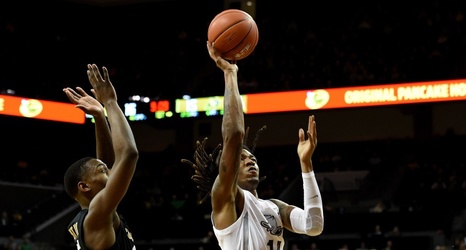 EUGENE, Ore.— The Colorado Buffaloes have harbored regrets about how they performed in their two toughest road games of the season, losing lopsided showdowns that turned into routs against nationally-ranked Kansas on Arizona.

The Buffs will be a little more satisfied with the effort they turned in during a top-20 battle Thursday night at Oregon, though they will be equally disappointed with the result.

Despite a balanced scoring attack, an often smothering defense in the first half, and a torrid night at the 3-point line, the 16th-ranked Buffs couldn’t get it done at crunch time, dropping a 68-60 decision against the 17th-ranked Ducks.